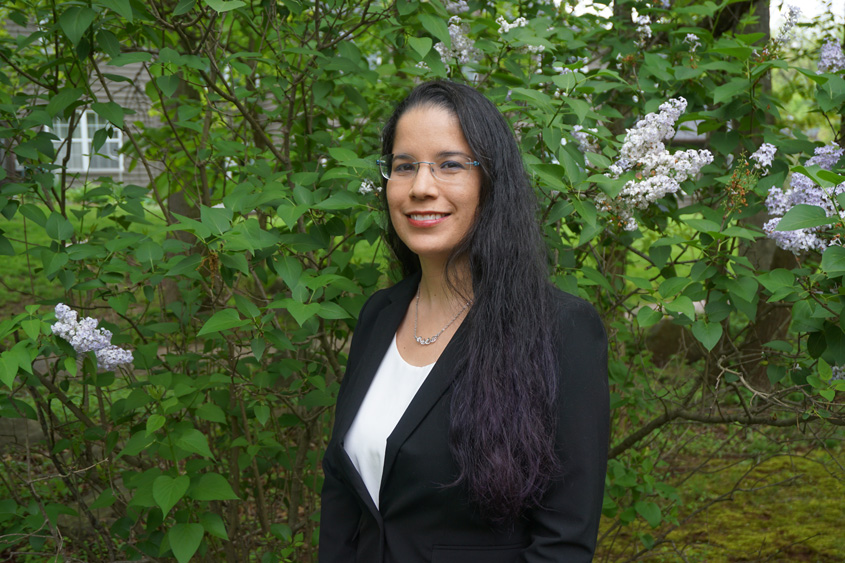 Editor's note: On Nov. 10, the Animal Welfare Institute honored Jessica Castillo Vardaro with the Christine Stevens Wildlife Award for her research on the American pika population and its vulnerabilities to human behaviors.

Jessica Castillo Vardaro, assistant professor of biology at San José State University, remembers the summer she fell in love with nature. She was just 5 years old.

The Santa Ana, California, native and her family piled into their red 1985 Chevy Astrovan for a trip across six different U.S. national parks, including Zion National Park, Yellowstone Park and the Grand Canyon.

“I remember seeing coyotes, bison, deer, moose, bighorn sheep, squirrels and chipmunks,” Castillo Vardaro recalled. “I was just so excited by it all that I knew I wanted to work outside in nature. When I think back to when I decided I wanted to become a wildlife biologist, it has to be during that trip.” 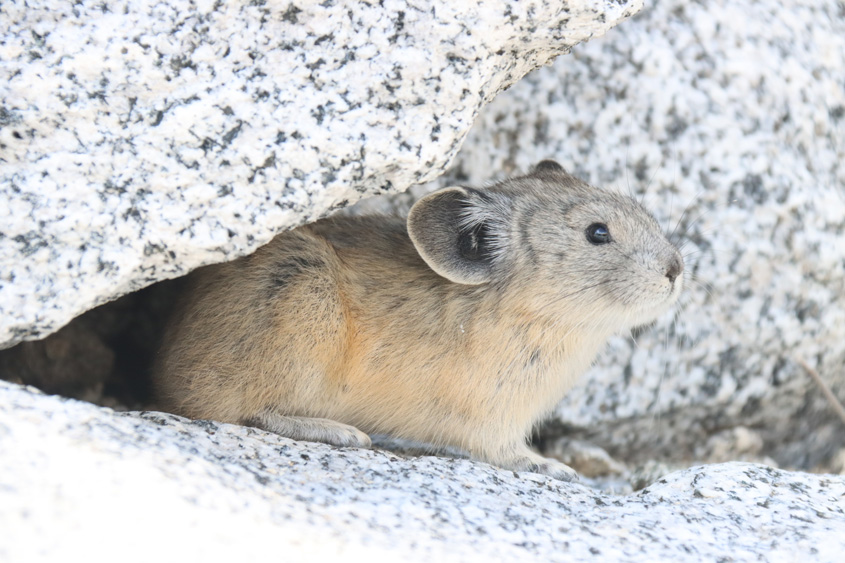 While her research has shed light on the ways humans can affect their environment, it serves another purpose: to empower students to become scientists, especially those who might not otherwise have had the opportunity.

Since she joined San José State in 2019, Castillo Vardaro has tried to remove barriers to research opportunities for underrepresented minority students, including Latino/a, Latinx and Hispanic students. She also works to keep those students on the pathway to success while fostering a sense of community.

"In my job, I’m an instructor, a researcher and a mentor,” she shared. “I use all three of those parts of my role to increase participation of underrepresented groups in the sciences, more generally, and in wildlife research, more specifically.”

From mountains to freeways 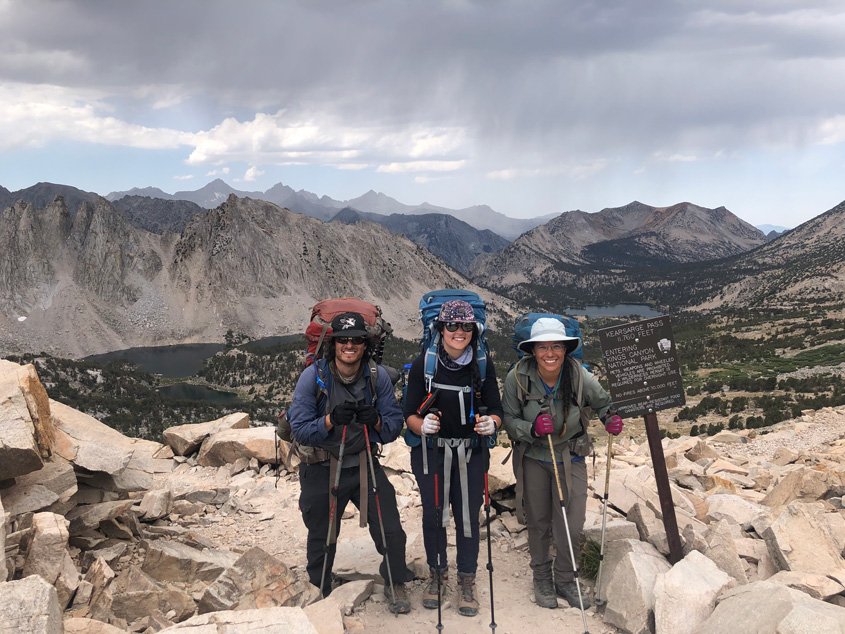 “We also were counting and identifying all the plants around the areas where the pikas lived,” Castillo Vardaro said. “We looked at what plants were available and are now comparing that to what plants they were choosing to eat.”

Understanding what pikas were eating — and why — could reveal a lot about how they adapt to their surroundings and what could cause them to become extinct, Castillo Vardaro explained.

For example, a pika could choose to eat something less nutritious but more readily available. Maybe a preferred food isn’t available anymore because of drought, higher temperatures or even humans manipulating vegetation for cattle grazing, Castillo Vardaro said. That could shed light on the potential long-term impact of human behaviors on the pikas’ habitat and food sources.

Those findings could also have implications closer to home.

“Think about squirrels, racoons and opossums in the San José area,” Castillo Vardaro said. “What does it mean for their populations that they used to be able to travel from the hills in the East Bay all the way to Santa Cruz in the peninsula — but now there’s a big city in the middle of their path?

“Or what does it mean if we put a big six-lane highway through some species’ natural habitat? By understanding the threats posed by climate change or our human activity, we could potentially limit our impact to help these populations survive.”

Castillo Vardaro knows firsthand that learning to become a wildlife biologist can be expensive. Entry into the field requires experience, which can end up being a financial burden on students, she explained.

As an undergraduate at the University of California, Berkeley, Castillo Vardaro found a paid part-time job at the university’s Museum of Vertebrate Zoology, where she gained experience that helped get her foot in the door. But not everyone is as fortunate, she said.

“Students often can’t afford to take unpaid lab positions,” she explained. “It’s really hard to get the right kind of experience when you already need to work one or two jobs to pay your bills.”

Even those who might be able to sacrifice income for volunteer experience could end up deterred by the costs of important field research opportunities.

“A lot of these opportunities will ask students to come volunteer for the summer — and to bring their own tent, and a $300 backpack, $200 boots and a $100 jacket,” she explained. “Those opportunities cost a lot of money, and it’s a real challenge for many students.”

That’s one of the reasons why Castillo Vardaro is trying to eliminate these types of obstacles by not only offering paid opportunities for graduate and undergraduate students in her lab but also by bringing field research to campus.

In January 2020, she jumpstarted an urban ecology research project on the SJSU campus. Students could study the different varieties of squirrels (there are two you’ll find in most parts of San José, Castillo Vardaro said) to better understand their adaptation habits.

The project was put on hold during the pandemic, but Castillo Vardaro hopes to revive it soon.

"One of the main motivations behind the project is to try to get students to have these practical, tangible experiences without having to travel and invest,” she said. “They can walk around campus and observe squirrels and learn lots of field techniques without needing to go up to the mountains, plus gain analytical and lab experience.”

There was a time when Emily Hadjes, ’22 MS Biological Sciences, thought she would never get into graduate school.

“I thought that I did not belong,” recalled Hadjes, who is of Peruvian heritage and identifies as Latinx. She’s one of the graduate students who gathered samples with Castillo Vardaro over the summer.

“I used to have this idea in my head that a scientist had to be a certain way, and that I did not fit into whatever that was,” she said.

Hadjes’ perception is a common one, noted Castillo Vardaro. That’s one of the reasons she serves as the faculty advisor for Society for the Advancement of Chicanos and Native Americans in Science (SACNAS) at SJSU. She wants to dispel many of the notions that Latinx and Indigineous students in STEM fields might have about what it takes to be a scientist.

“There are a lot of challenges STEM students face,” she said. “A lot of them might come into their first year thinking, ‘I’m going to be a biology or chemistry major,’ and then they don’t do so well in their intro classes and think, ‘Oh well, I guess I’m not good enough.’ Then, they switch majors.

“In reality, you could fail your bio or chem class, but still end up perfectly successful,” she continued. “College is different from high school, so there are lots of reasons why someone wouldn’t do well in a class.”

SACNAS is about providing a community for these students so that they don’t feel isolated or ready to give up as easily when met with adversity, Castillo Vardaro explained. By offering  students of similar backgrounds an opportunity to network with one another, plus tools for professional development, she said students can feel uplifted and supported.

Learning from Castillo Vardaro helped Hadjes put to rest any of her self doubt about her future as a scientist.

“Dr. Castillo Vardaro understood me and believed in me,” she said. “Being mentored by someone who is also of Latinx descent has been such an uplifting experience. She helped me feel like I belong here and that I belong in science, too.”

Michael Hernandez, ’22 MS Biology, another student who worked with Castillo Vardaro over the summer, agreed.

“I have had a number of jobs in which I may have been the only Latinx member present, so having a [principal investigator] who looks like me has been a refreshing change. It reinforces the notion that I can succeed in my studies and career objectives, and that there is a place for me in my chosen discipline.”

Castillo Vardaro understands the value of learning from someone who comes from a similar background. She realized early on that when she joined San José State, she wasn’t just stepping into a faculty position — she was serving a need. She hadn’t even shown up on campus once she was hired before a buzz started circulating about a new Latina professor in the sciences.

“Students were emailing me telling me they wanted to meet me,” she recalled.

“Growing up, I never had any professors, role models or mentors who looked like me or shared my experience. My motivation for coming to San José State is that this is a primarily undergraduate institution and a Hispanic-serving institution. The student body really reflects the demographics of the area.

“Sometimes I like to fade into the background and focus on myself, but here I have this important role built in, to be visible. So I want to do my very best with that.”