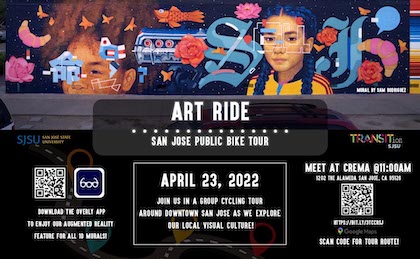 When: April 23, 2022 @ 11am
Where: Crema, 1202 The Alameda, San Jose
Why: Get the Overly app to see augmented reality info
Map: See here for a Google Map for navigation
Tour Leaders: Lourdes Jimenez, Lydon George, and Mari Hsu

Saturday, April 23, 2022, we rode through Downtown San Jose and explored the city's vibrant murals that have become a visual representation of the city and its community. This tour provided a compelling new perspective on the way we see murals in San Jose and allowed us to reflect on what is being presented to us in public space.

We experienced the stories that produced these murals, for whom they were intended, and who were they funded by; this information provides a painted picture of the cultural economy of San Jose and highlights the crucial role of the artist as they exhibit a cultural identity inspired by the city's site history, agglomeration, and locational specialization.

Sponsored by Institute for Metropolitan Studies.

TRANSITion SJSU is a student-led advocacy group that works to improve public transportation to San Jose State University and Silicon Valley. The symbiosis of Art and Transportation in this event serves as an initiative to activate the community to experience the local bicycle infrastructure while experiencing our local visual culture.

Note: This student club is not responsible for safety. Please bring a functioning bike, wear a helmet, and obey all traffic rules.