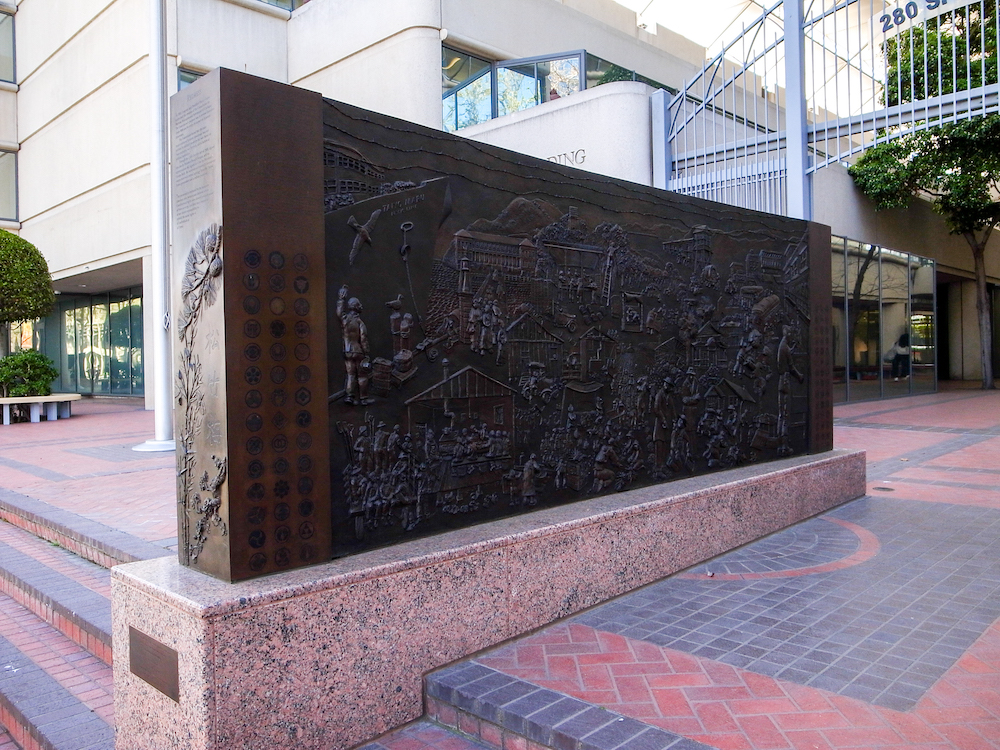 Created by Japanese American modernist sculptor Ruth Asawa, this memorial, located outside of the Federal Building, commemorates the forced removal and incarceration of Japanese and Japanese-American residents of California during WWII.

Sculpted in bas-relief bronze, the memorial depicts key aspects of the Japanese American experience, before and after the WWII with a central focus on the experience of the incarcerated Japanese Americans during the war. The mural includes scenes of immigration, community life and agricultural labor and alongside symbols of the incarceration camps, including barracks, barbed wire, a watch tower, and heavily armed soldiers.

The whole is accompanied by text panels that include Executive Order no. 9066 by which relocation to internment was ordained, maps of internment camps, and other historical documents. A native Californian, Asawa  herself, spent four years at an internment camp in Rohwer, Arkansas along with her family.

While the memorial symbolically commemorates the experience of all Japanese Americans, it has a special poignancy in San Jose, whose thriving Japanese and Japanese- American community experienced forced removal, incarceration and loss of property as a result of Executive Order no. 9066. Moreover, On May 24 and 25, 1942, San Jose State University served as a registration site for local residents of Japanese descent prior to their forced removal and incarceration. (See "Japanese American Internment and the Men's Gynmasium")

The “Japanese Internment Memorial” pushes the view to resist the urge to assign the injustices of the past to the yellowed pages of history. Memorializing the relocation and removal of Japanese Americans during World War II serves as an inflection point for considering the treatment of different groups today – where there is a failure to extend dignity, equality, and justice.

The placement of the memorial at the Federal Building recalls the actions of the United States government to act without dignity, equality, and justice and serves as a permanent protest against the violation of civil and human rights.

Make your way by the Plaza de Cesar Chavez, a few other works of public art, and The Tech Interactive to see our next interesting artwork located on Paseo de San Antonio, one of the most used passages in downtown.