Arch of Dignity, Equality, and Justice 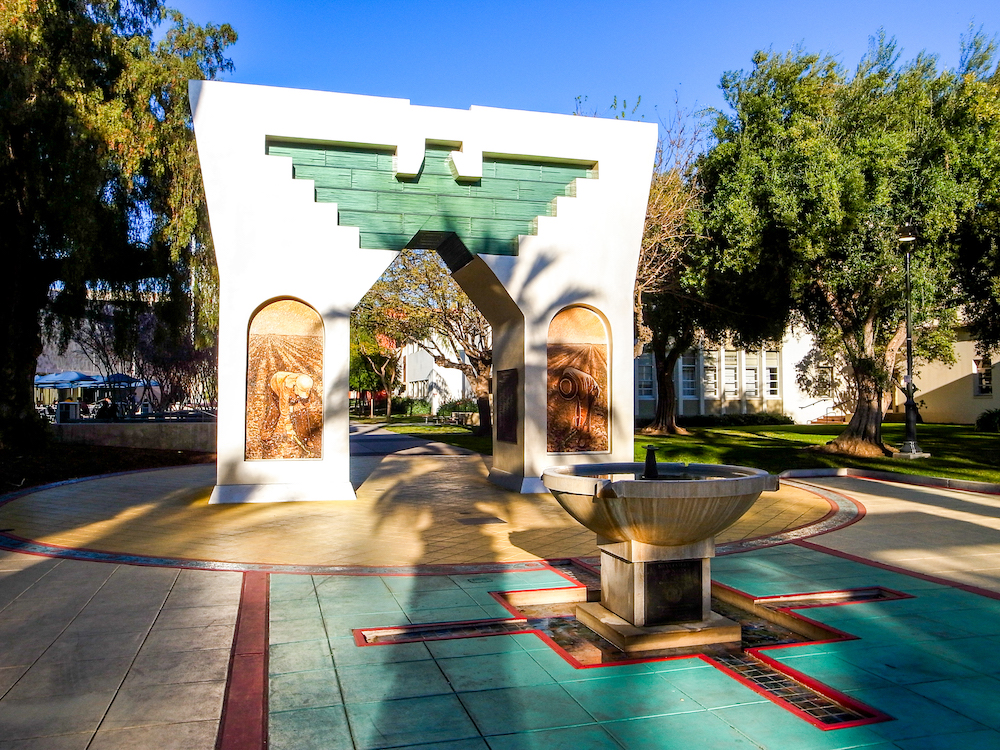 Please begin your journey with us by reading the Muwekma Ohlone SJSU Area Land Acknowledgement. You'll learn more about Muwekma Ohlone at one of our stops today.

San José State University is a downtown campus in the nation’s 10th largest city (and the 3rd largest city in the state of California). The urban landscape in the heart of Silicon Valley is unique among the 23 California State University public higher education campuses because its geography offers 27,700 undergraduate and 5,400 graduate students spanning eight colleges the experience to apply knowledge gained in the classroom to community-engaged projects. This means the city serves as an urban laboratory presenting endless opportunities for real-world knowledge and research.

SJSU evolved from the picturesque Tower Hall Normal School from more than 100 years ago to a commuter university and now a thriving livable community, though Tower Hall remains the iconic centerpiece of San Jose State University. Built in 1910 it is the oldest structure on campus and the oldest public school of higher education in California. State architects Sellon and Hemmings designed the building in a Spanish Revival style with Gothic, Renaissance Revival, and Modern influences to reflect diversity found in San Jose at the time.

Today there is a mix of architectural styles ranging from international, Bauhaus, mid century modern, to the postmodern high rise campus village, and contemporary student health center and student union, and the towering glass science building currently under construction. These investments have regional influence as a transformative university that educates Silicon Valley.

The structure is based on a Mayan corbelled arch design with Spanish and indigenous roots and features mosaic tile murals. The exterior pillars depict Dolores Huerta, co-founder of the United Farm Workers, and Mahatma Gandhi, whose philosophy of non-violence was an inspiration to Chavez are presented as two pillars for the work of the United Farm Workers Union, which is represented at the top of the arch through it’s symbol -- the eagle.

The opposite side pillars depict a male and female farm worker from the Salinas Valley, while the interior of the arch is dedicated to a portrait of Chavez, a nod from Baca to the activist’s humble nature. The Virgin of Guadalupe symbolically blesses Chavez’s actions, while a skull represents the deaths of farm workers from pesticides.

Placed adjacent to the Student Union building and off of an important pedestrian passageway, the Arch is designed to be circumambulated and entered. For Baca, as students and visitors to SJSU move through the arch and learn of Chavez and his work, their own bodies are symbolically transformed from witnesses to activists.

“The Arch of Dignity, Equality, and Justice,” is a reminder that the work to achieve dignity, equality and justice is often borne by those who have been denied those basic human rights. The Mahatma Gandhi inclusion traces the genealogy of resistance against those forces that denied the parity of respect to all human beings over the course of the century.

Resistance to the denial of civil and human rights is referenced by the presence of Dolores Huerta, who with Cesar Chavez led the United Farm Workers in their struggle for equal rights. Huerta serves as an acknowledgement to the women who led and worked alongside men in securing rights but are often left out of the narrative in favor of their male counterparts.

Here the Arch serves as a reminder of those whose work has not received the attention or acknowledgment that they deserve. The United Farm Workers symbol of the eagle is a reference to the work of the organization as well as a reminder of the connection between the Indigneous peoples of California and Mexico.

The symbol of the eagle would give courage to the farm workers. César made reference to the flag by stating, "A symbol is an important thing, that is why we chose an Aztec eagle. It gives pride...When people see it, they know it means dignity." The flag was unveiled at the first mass meeting of the newly formed union. The black eagle signifies the dark situation of the farm worker. The Aztec eagle is a historic symbol for the people of Mexico. The UFW incorporated the Aztec eagle into its design in order to show the connection the union had to migrant workers of Mexican-American descent, though not all UFW workers were Mexican-American. The white circle signified hope and aspirations. The red background stood for the hard work and sacrifice that the union members would have to give." (from Andy Behrens, 5 November 2012)

The eagle and the condor are integral to the spiritual and worldview of the Indigneous peoples. They traversed the air and the lands freely prior to colonization and the establishment of political borders and remain integrally connected today. A symbolic representation of dignity and pride that pushes back on the degrading stereotypes that have been used to describe them. Though divided by a national border the peoples of Baja and Alta California, they have continued to remain connected and have supported each other.

We invite you to walk through the arch as a symbolic starting point for your journey through this walking tour. The next public artwork will be right in front of you.