Sophie Holding the World Together 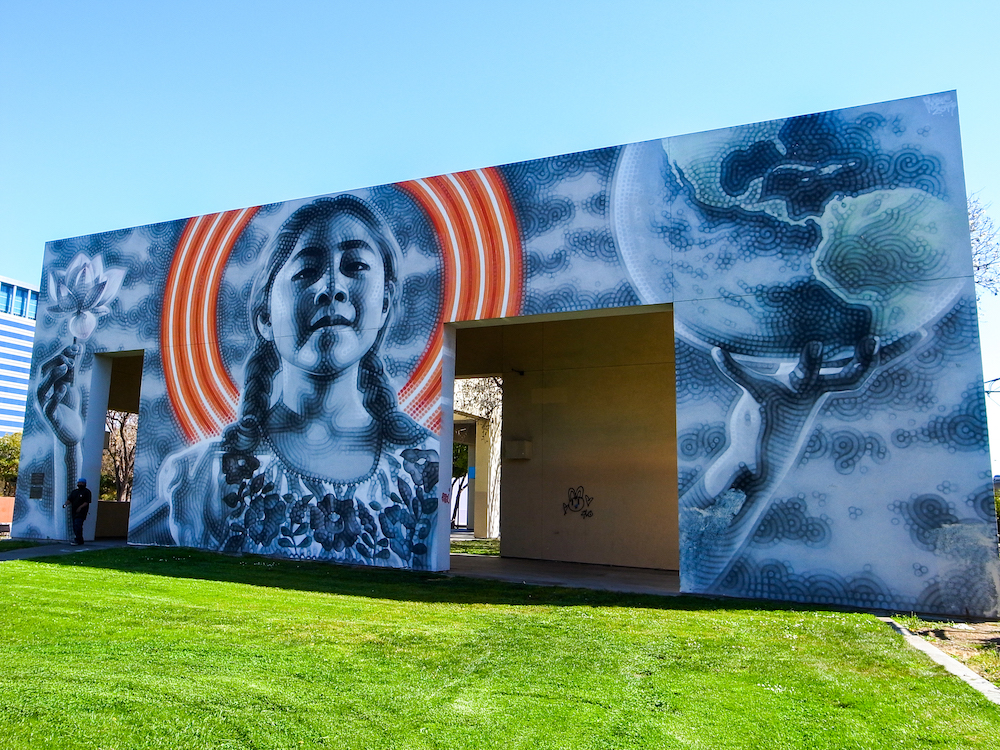 Created by renowned artist and muralist, El Mac, in collaboration with writer and artist, Chris Myers, the arts collective The Propeller Group, the urban contemporary arts gallery Empire 7 Studios, and The San José Museum of Art and the Children’s Discovery Museum, “Sophie Holding the World Together” brightens the San José urban Discovery Park and offers a striking symbol of hope and human presence that dominates the wide-open green park. The young girl, at a colossal scale, holds in her hands the world (a globe) and a lotus flower (symbol of humble beginnings). Her arms are raised high in ritual, strength, reverence, openness and acceptance. She looks just slightly down on us (her chin ever so slightly tucked in) the imperative urgency.

The mural hums with dynamic energy; and indeed the two portals, which lead to the Children Discovery Museum’s arcade where artists and musicians often perform, welcome the public and further encourage openness and fluidity, community and culture. The child in this mural, however, is neither mythological nor fantastical, but represents a brave and self-possessed seven year-old from Los Angeles named Sophie Cruz, an American activist who advocates to protect the undocumented and fights for United States immigration reform. Though she is an American citizen, her parents are undocumented (in contemporary terminology she is of a “mixed-status family”) and she lives, still today, in fear that ICE (Immigration and Customs Enforcement) will deport her parents back to Mexico, her family’s country of origin.

“Sophie Holding the World Together” challenges the viewer to decenter themselves and attempt to perceive the world through the eyes of a young woman. In stepping back and considering her perspective on what the world would be like if empathy were employed in immigration policies and practices. The representation of the hope of a new life and the potential to contribute to the betterment of the world is asking the viewer to resist taking the easy path in seeing immigration as an issue and not as a human experience that deserves understanding and compassion.

Place names and street names memorialize notable histories but also influence place identity. On your way to the next stop, follow Woz Way, named for Steve Wozniak co-founder of Apple, to Pierce Avenue in the historic Market-Almaden Conservation Area. This neighborhood is characterized by mostly single family Victorian homes and Craftsman bungalows dating between the late 1800s and early 1900s. Planned for an urban village in downtown the well maintained old homes sit next to contextually sensitive urban infill houses built nearly a century later.

As you near Market Street notice the transition from traditional architecture to contemporary midrise redevelopment. This added housing supply addresses the need for more housing quantity but the city struggles to offer sufficient housing affordable to all.