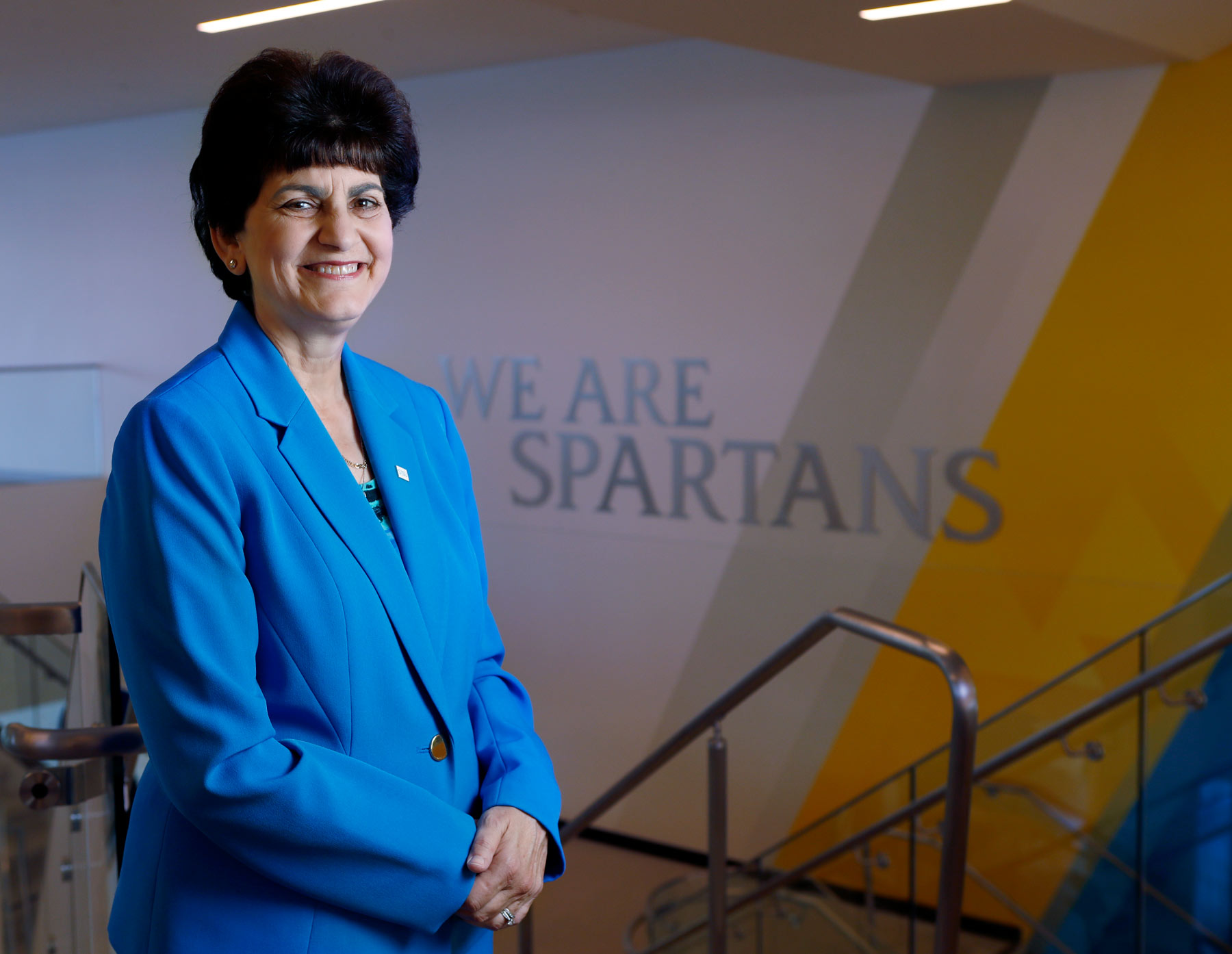 How does a scholar of the 17th century metaphysical poets, including John Donne and John Milton, become the leader of a flagship public university that fuels the creativity and energy of Silicon Valley?

Perhaps the answer for Dr. Mary A. Papazian, president of San José State University since July 2016, is her fascination with how artists and the arts reflect, interact with and survive in turbulent times, as they certainly did the early 1600s in England, a period of great innovation in all spheres, and no less so today. Using these insights from long-ago poets gained over the past three decades, she has built her academic career as a professor and as an academic and administrative leader dedicated to the enduring importance of public education to the benefit of society.

As the leader of the oldest public university in the west, the founding campus of the California State University system, and Silicon Valley’s only public university, Dr. Papazian is firmly committed to ensuring the success of all students; maintaining an environment that honors shared governance and is defined by open, transparent, and inclusive leadership; fostering a campus culture of curiosity and discovery; and building enduring campus and community partnerships.

Since she arrived at SJSU in 2016, Dr. Papazian has remained focused on strengthening communication among campus leaders, students, faculty and staff. She has been energizing alumni, supporters and friends of the university, as well as elevating engagement with elected, industry and community leaders on important regional policy issues such as affordable housing, transportation and economic opportunity that are critically relevant to an urban university.

To achieve the university’s primary mission of learning and research, she also continues to empower people across the university to focus on student success; identify and act on opportunities to enhance operational effectiveness; and achieve a comprehensive vision for SJSU to be America’s preeminent urban public university.

Notable milestones since Dr. Papazian’s appointment include the groundbreaking for the Interdisciplinary Science Building—the first new SJSU academic building in 30 years—and approval of plans to build a Science Park. She spearheaded a series of Town Hall events hosted by SJSU’s Institute for the Study of Sport, Society and Social Change, launched a full renovation of the South Campus Athletics Fields, developed the East Side Promise [pdf] program to support talented local students, and, working collaboratively with the university community, launched a ten-year strategic plan, Transformation 2030, that positions SJSU for long-term excellence in the 21st century in the nation’s tenth largest city.

In January 2020, Dr. Papazian brought a group of government and civic leaders together on the SJSU campus  to announce the university’s plans to redevelop state-owned property in downtown San Jose to help meet the affordable housing needs of faculty, staff, and graduate students, as well as to announce short and long term strategies to address the needs of SJSU’s most vulnerable students.

In June 2020, Dr. Papazian announced plans to address systemic racism at SJSU. Within the first 30 days, she led San José State to establish a task force dedicated to campus safety and policing, the creation of two new roles in the Office of the President to support racial equity efforts at SJSU, management training on racial justice and workplace inclusion, the revitalization of employee resource groups and the retiring of the “Spartan Up” hand gesture. Dr. Papazian is committed to instituting further long-term efforts at SJSU.

Dr. Papazian writes and speaks frequently about higher education issues in outlets such as her blog and video blog, op-ed pieces and essays, television news broadcasts, podcasts, national and international conferences, and other venues. She has written extensively about state and federal budget matters related to higher education, for instance, as well as issues as broad and diverse as Title IX; democracy and civic responsibility in higher education; the continuing importance of the liberal arts and humanities; the perils and benefits of the digital age; and, most recently, systemic racism.

Before coming to San José State, Dr. Papazian served as president of Southern Connecticut State University in New Haven, Connecticut, for nearly five years. She strengthened programs supporting the successful transition of first-year and transfer students. She established a vision for SCSU’s first-ever comprehensive philanthropic campaign and helped secure a $3 million gift and a $1.2 million bequest to establish its first endowed chair. Under her leadership the university opened its new Academic Laboratory and Science Building and expanded international education and study abroad programs. She also worked to increase research opportunities for undergraduate students and expand scholarships to support student recruitment, retention, and completion.

Previously, Papazian was provost and senior vice president for Academic Affairs at Lehman College of The City University of New York for five years, where she managed a $70 million budget that supported 450 full-time faculty members and 200 staff members serving more than 14,000 students in the Bronx. She also served as dean of the College of Humanities and Social Sciences at Montclair State University in New Jersey, and as associate dean of the College of Arts and Science at Oakland University in Rochester, Michigan, where she began her academic career as an assistant, associate, and full professor of English.

Of Armenian heritage and a native of southern California, Dr. Papazian holds bachelor’s, master’s and doctoral degrees in English literature from the University of California, Los Angeles. She and her husband Dr. Dennis R. Papazian, founding director of the Armenian Research Center at the University of Michigan, Dearborn, have two adult daughters.

According to Dr. Papazian, although John Donne and John Milton lived centuries ago, their voices, passions and warnings continue to ring true to our modern ears. Their explorations through powerful language of the moral battles between self and duty, between good and evil and between church and state continue to inform Mary Papazian’s approach to university leadership and the essential role of San José State, Silicon Valley’s public university.

Office of the President