A Conversation About Race and Urban Space in Sparked: George Floyd, Racism, and the Progressive Illusion and The Confession of Copeland Cane 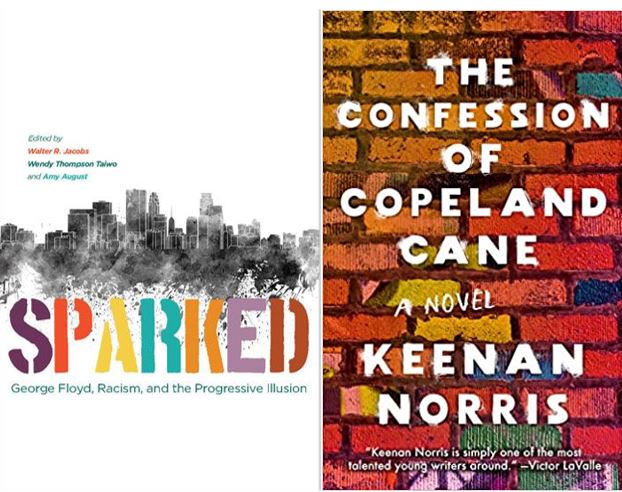 Watch our recording of the panel discussion on Race in Urban Spaces.
Passcode required to view recording: NL$^3&Gq

Watch the video on Race in Urban Spaces

On May 25, 2020, George Floyd, an unarmed Black man, was killed by Minneapolis police officers, sparking months of unrest at home and around the world. As millions took to the streets to express their outrage and speak out against systemic racism, injustice, and institutionalized violence, the city of Minneapolis and its residents were deeply shaken. For many, George Floyd’s murder and the ensuing uprisings shattered the city’s reputation for progressive ideals and a high quality of life. Sparked: George Floyd, Racism, and the Progressive Illusion is an anthology edited by two SJSU faculty members and an SJSU dean that brings together the perspectives of social scientists, professors, and other academics who work or have worked in Minnesota. The anthology’s essays present reflections on racial dynamics in the Twin Cities and the intersection of the wonderful and wretched sides of that existence, revealing deep complexities, ingrained inequities, and diverse personal experiences.

Set in East Oakland in a very near future, Keenan Norris’s novel The Confession of Copeland Cane is a vital dispatch to our present times. Copeland Cane V is a teenager with a predilection for flip phones, a finely developed sense of the absurd, and a spot at the nearby prep school even as he and his folks face eviction from their apartment. Meanwhile, property developers are waging war across Oakland, and the state has merged with the Soclear Broadcasting conglomerate to surveil and harass Cope’s neighborhood in the name of anti-terrorism. And in the aftermath of a protest rally against police violence, everything changes, and Cope finds himself a wanted man without a clear past or future. One boy’s coming of age story converges with an American history that has not yet occurred—but that all too easily could.

In this panel discussion, two SJSU faculty members and a dean discussed the dynamics of race and urban space in the United States, with a special emphasis on the San Francisco Bay Area and the Twin Cities of Minneapolis and St. Paul, Minnesota. The panelists were Sparked editors, Wendy Thompson Taiwo and Walt Jacobs, and Keenan Norris. The event was moderated by Jalylah Burrell, who recently moved to Oakland.

Keenan Norris is an assistant professor of English and Comparative Literature at San José State University. His latest novel is The Confession of Copeland Cane. His novel Brother and the Dancer won the 2012 James D. Houston Award, and he served as editor of the critical anthology Street Lit: Representing the Urban Landscape. He is guest editor for the Oxford African American Studies Center, and was a 2016 Callaloo fellow, as well as a 2020-21 Public Voices fellow and a 2017 Marin Headlands Artist-in-Residence fellow. His editorials and essays have appeared in the Los Angeles Times and Los Angeles Review of Books, Alta, LitHub and Remezcla.

Wendy Thompson Taiwo is an assistant professor of African American studies at San José State University. Her research and teaching interests include Black migration to the Bay Area, Black women and mothering, race and the built environment, and Black visual expressions of social status and class. She previously worked as an assistant professor of Ethnic Studies at Metropolitan State University in the Twin Cities.

Walt Jacobs is a sociologist and the Dean of the College of Social Sciences at San José State University. He is the author of the ethnography Speaking the Lower Frequencies: Students and Media Literacy, and coeditor (with Jeffrey Di Leo) of If Classrooms Matter: Progressive Visions of Educational Environments. He serves on the board of directors for the Council of Colleges of Arts and Sciences (CCAS) and for StoryCenter, the world-renowned nonprofit organization that uses innovative story development practices and participatory media methods to support people in sharing personal narratives rooted in their own life experiences.

Jalylah Burrell is an assistant professor of African American Studies at San José State University. Her research and teaching are focused on African Diasporic literature and popular culture and enhanced by experience as a storyteller—pop culture critic, digital producer, oral historian, and deejay. Her current book project is titled “Capacity for Laughter: Black Women and the American Comedic Tradition.”