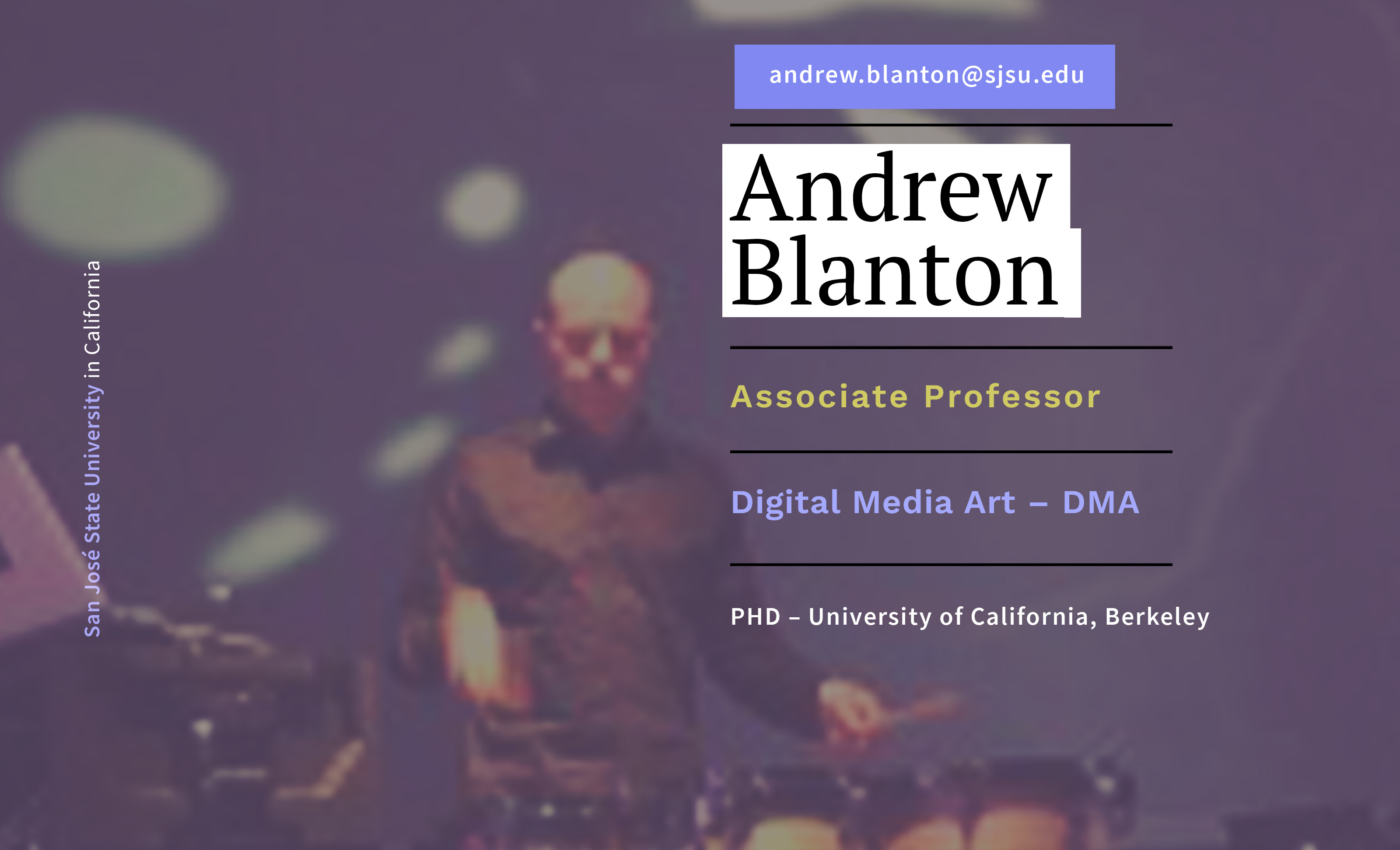 Andrew Blanton is an Associate Professor in the CADRE Media Labs at San Jose State University. His work has been performed and presented around the world in venues such as Google Cultural Lab in Paris, The University of Brasilia, The City University of Hong Kong, STEIM Amsterdam, and The American University Ciaro among many others. His current work focuses on the emergent potential between cross-disciplinary arts and technology in the context of Music Composition, New Media Art, and building sound + visual environments through software development. Andrew has advanced expertise in percussion, 3D environments/graphics programming, creative software development, and developing projects in the confluence of art and science. 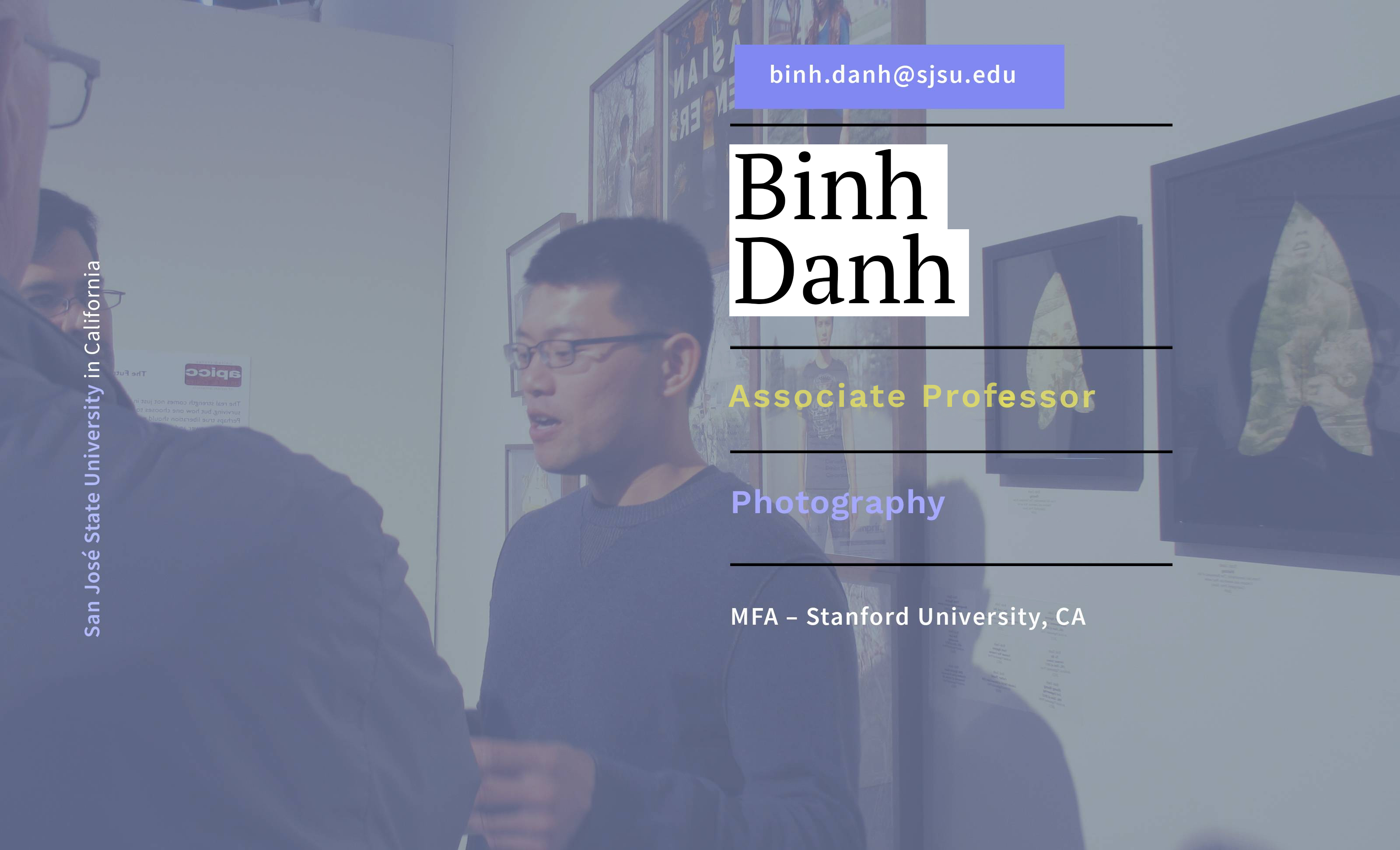 Binh Danh (MFA Stanford; BFA San Jose State University) emerged as an artist of national importance with work that investigates his Vietnamese heritage and our collective memory of war. His technique incorporates his invention of the chlorophyll printing process, in which photographic images appear embedded in leaves through the action of photosynthesis. His newer body of work focuses on nineteenth-century photographic processes, applying them in an investigation of battlefield landscapes and contemporary memorials. A recent series of daguerreotypes celebrated the United States National Park system during its anniversary year.

His work is in the permanent collections of the National Gallery of Art, the San Francisco Museum of Modern Art, The DeYoung Museum, the Philadelphia Museum of Art, the Center for Creative Photography, the George Eastman Museum, and many others. He received the 2010 Eureka Fellowship from the Fleishhacker Foundation, and in 2012 he was a featured artist at the 18th Biennale of Sydney in Australia. He is represented by Haines Gallery, San Francisco, CA and Lisa Sette Gallery in Phoenix, AZ. He lives and works in San Jose, CA and teaches photography at San Jose State University. 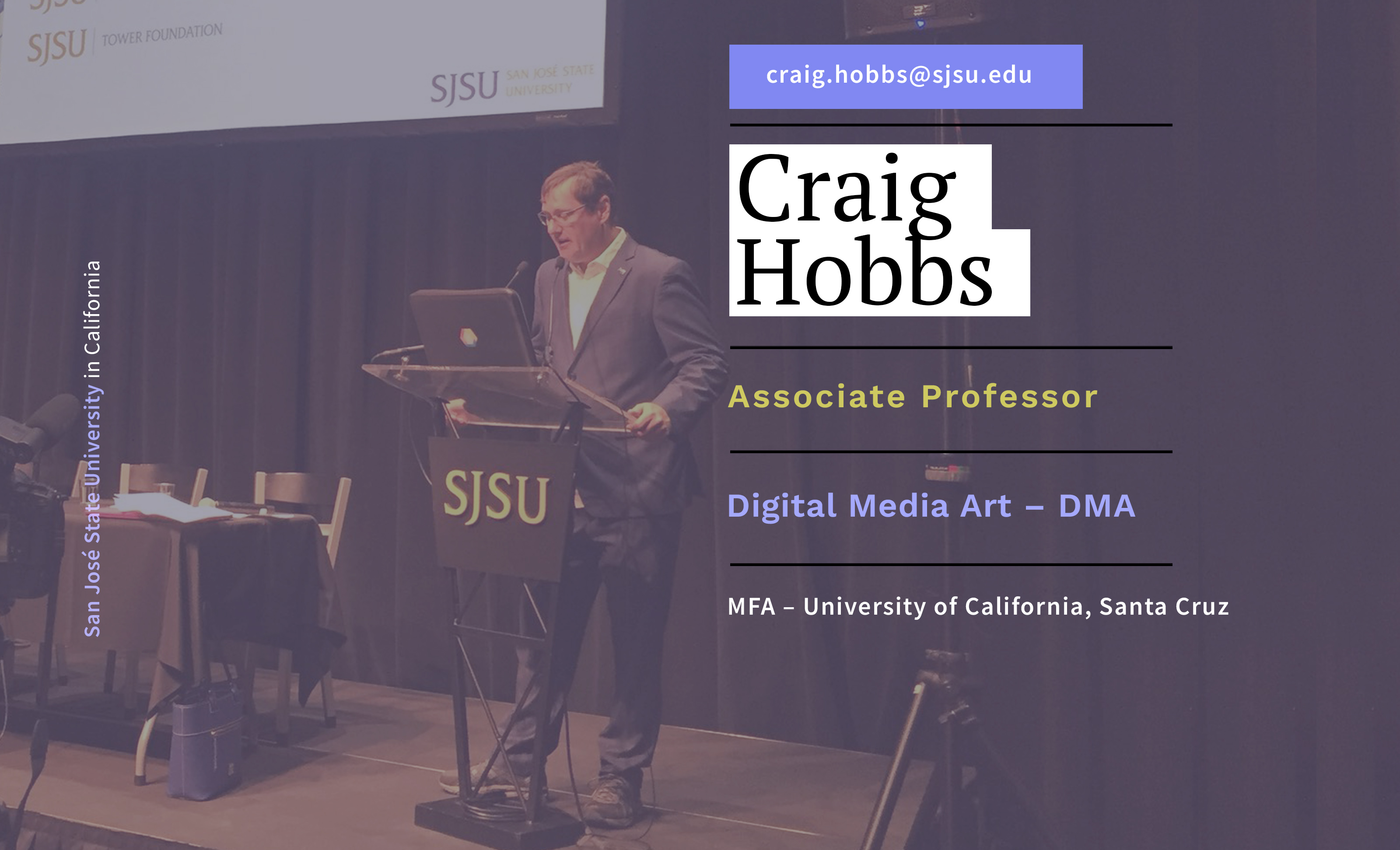 Hobbs produces large-scale public art, installations, and films. His past collaborations include: Natalie Jeremijenko, Usman Haque, Blast Theory, Andrea Polli, Yung-Ta Chang, AntiVJ, Robin Lasser, Thomas Dolby and fabric | ch, among others. Hobbs received his BFA from California Institute of the Arts and his MFA from the Digital Arts and New Media program at University of California, Santa Cruz. He has served as a visiting professor at Conservatoire National des Arts et Métiers in Paris, France and as researcher and lecturer at the University of California, Santa Cruz and California College of the Arts (CCA) in San Francisco. Hobbs is currently Associate Professor of Digital Media Art (DMA) and Director of the Paseo Prototyping Challenge and Festival at San José State University in San José, California. 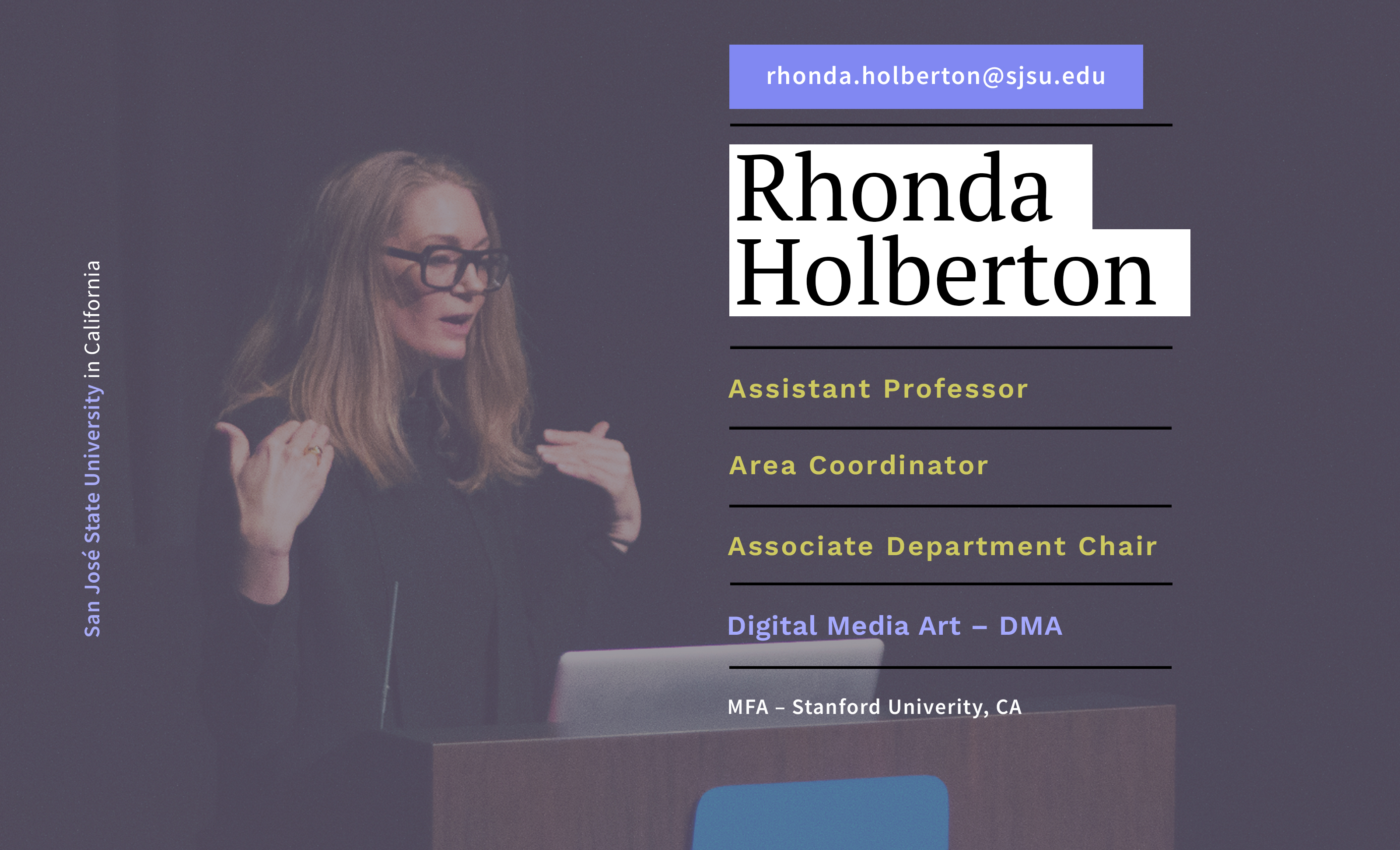 Rhonda Holberton holds a MFA from Stanford University and a BFA from California College of the Arts. Her multimedia installations make use of digital and interactive technologies integrated into traditional methods of art production. In 2014 Holberton was a CAMAC Artist in Residence at Marnay-sur-Seine, France, and she was awarded a Fondation Ténot Fellowship, Paris. Her work is included in the collection of SFMoMA and the McEvoy Foundation and has been exhibited at CULT | Aimee Friberg Exhibitions, FIFI Projects Mexico City; Yerba Buena Center for the Arts; The Contemporary Jewish Museum, SF; Berkeley Art Center; San Jose Institute of Contemporary Art; and the San Francisco Arts Commission. Holberton taught experimental media at Stanford University from 2015-2017 and is is currently Assistant Professor of Digital Media at San Jose State University. She lives and works in Oakland. 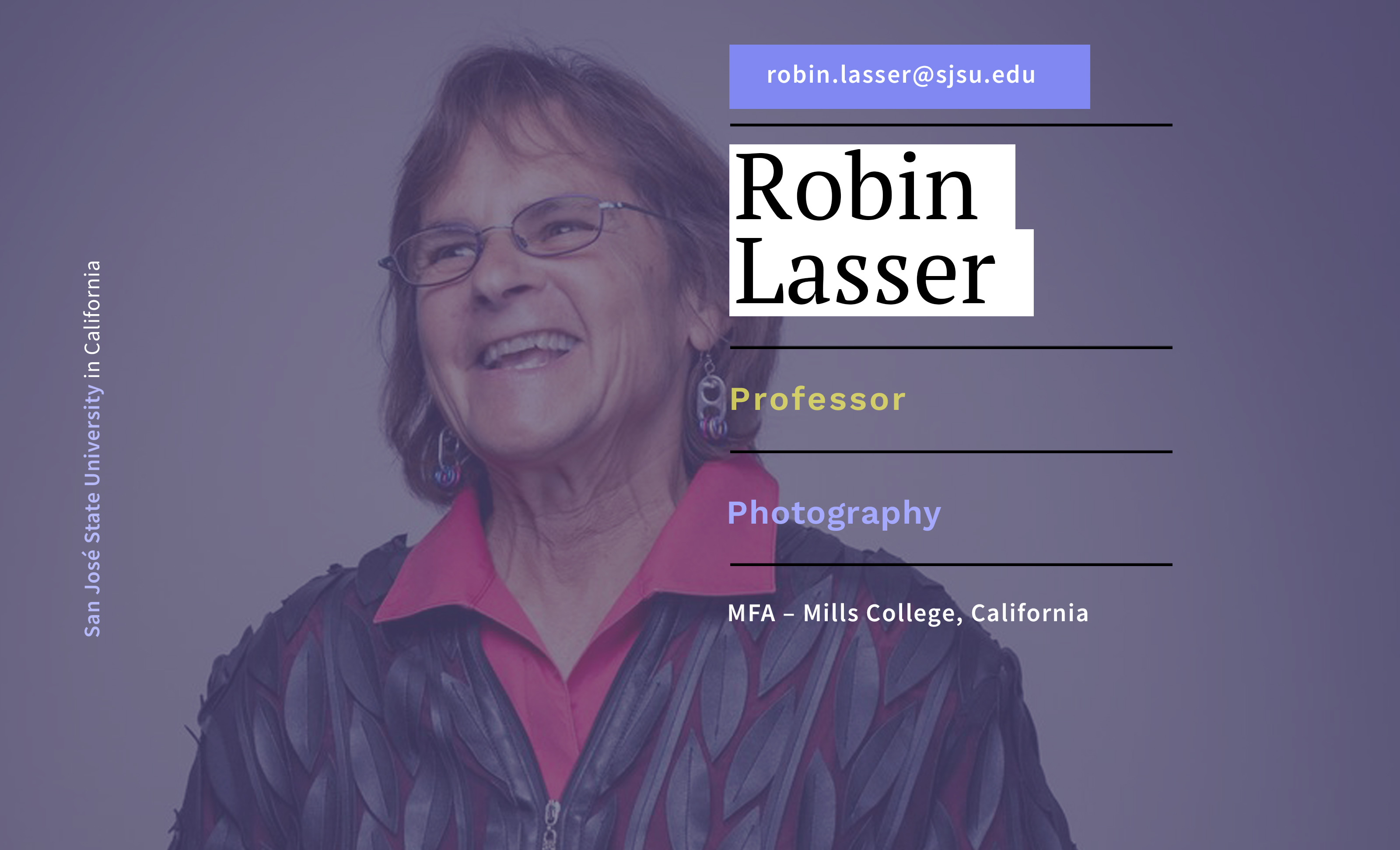 Robin Lasser is a Professor of Art and former Coordinator of the Photography Program at San José State University. Lasser is also the project lead for the Seven Days-Sister City-Artist Exchange. She lives in Oakland, California with her husband Jim Gold and son Alex Lasser-Gold. Lasser produces photographs, video, sound, site-specific installations, and public art, which explore environmental, health, cultural and social issues, especially as they pertain to women. Lasser often works in collaboration with other artists, students, public agencies, and international coalitions to produce art and promote public dialogue. The creative team of Robin Lasser + Adrienne Pao have developed and managed the Dress Tents project since 2004. 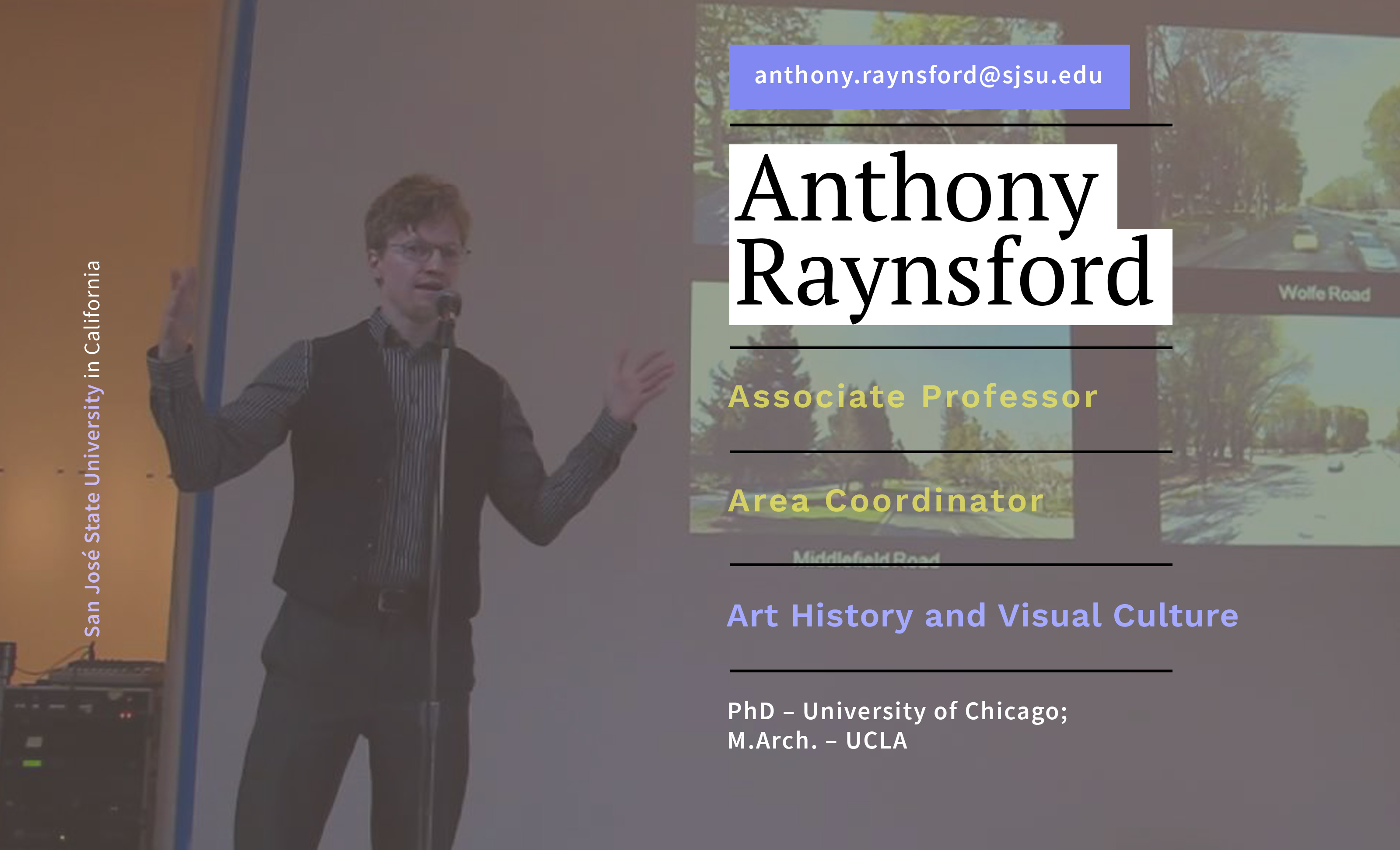 Anthony Raynsford is Associate Professor of Art History at San Jose State University. His research focuses on the ways in which cities have been visually imagined and represented by architects and urban planners in the late 20 th century. Publications include, Civic Art in an Age of Cultural Relativism: The Aesthetic Origins of Kevin Lynchs Image of the City (Journal of Urban Design) and “Urban Contrast and Neo- Toryism: On the Social and Political Symbolism of The Architectural Review’s Townscape Campaign” (Planning Perspectives). His current book project, “Cities for an Open Society,” is an intellectual and cultural history of Anglo-American urban design of the postwar period, with an emphasis on urban design as political allegory. 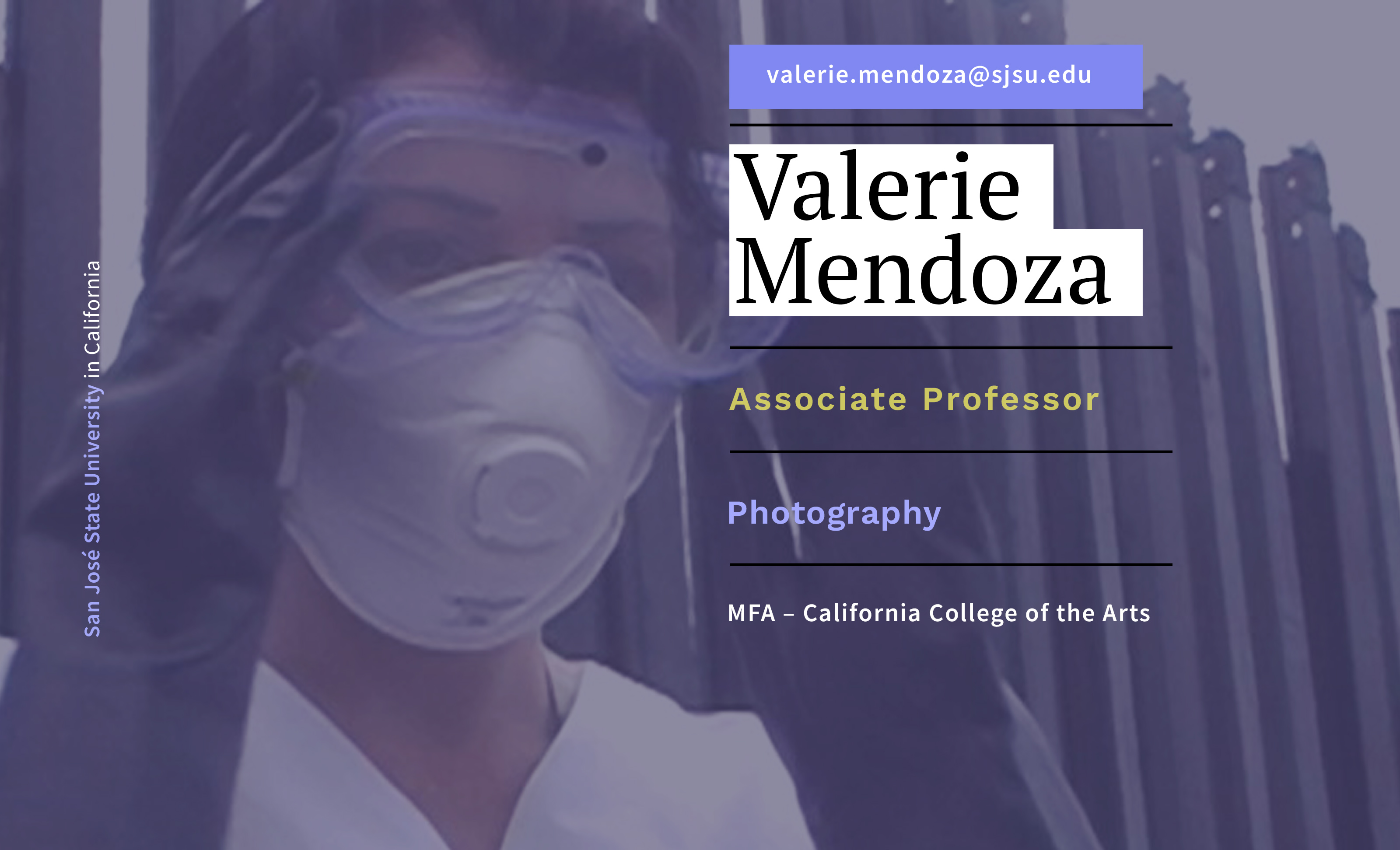 Research for her video series, Consumption, took her to Spain, France and Belgium in the early 2000’s. She worked as part of an archeological team focused on Neanderthal belongings and remains in 2002 for her video/installation division. From 2005 to 2006, she worked at the border of the U.S. and Mexico shooting footage for her video/installation Different, naturally. In fall of 2010, she began a new body of work addressing the national housing crisis. As one of 8 artists in residence at Camac Centre D’Art, Marnay Art Centre, France in December, 2010, she began work on her photo-based installation Monument: 91 Images of One Vacant Property for Sale. A preliminary version of her companion installation entitled Our Agentswas completed in 2016. Over summer 2016, she spent four weeks in Portugal during a Caminho português de Santiago, taking over 2000 photographs studying perceptions of land use both similar to, and different from those in the U.S. In fall of 2017 she was one of 5 artists in residence at DE LICEIRAS 18, Porto, Portugal, where she extended her research addressing the issue of housing on an international level. A solo exhibition, O Custo de Vida(The Cost of Living) was featured in November 2018 at Galeria do Sol in Porto, Portugal.

Mendoza’s work has been exhibited in France, Ireland, Mexico, Portugal, and venues throughout the United States. Her practice is based in the San Francisco Bay Area where she is an Associate Professor at San José State University. 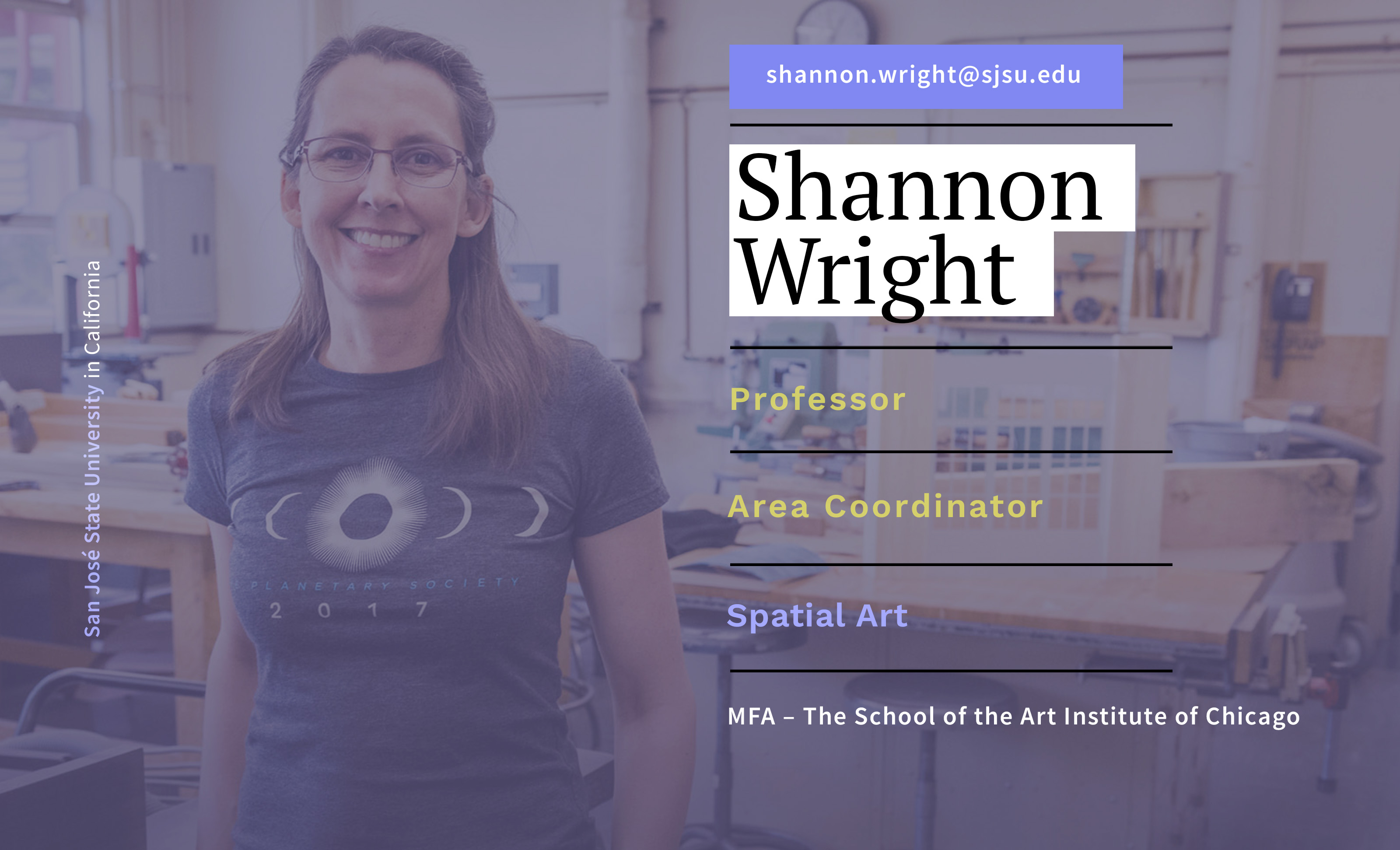 Shannon Wright is a sculptor and installation artist based in San José, California. Born in Baton Rouge, Louisiana, Wright grew up chiefly in Sydney, Australia, and then spent her artistically-formative years among the iron trestle bridges and turn-of-the-last-century hydroelectric power plants and foundries of Richmond, Virginia. Wright earned her BFA in Sculpture from Virginia Commonwealth University and her MFA in Time Arts from The School of the Art Institute of Chicago. She is a Professor of Spatial Art, and Coordinator of the Spatial Art program, at San Jose State University.

In the past decade, Wright has been creating her own spurious "ruins" and monuments in reaction to a society whose mercantile logic never ceases to disorient her. Wright puts forth fictional products that might appear to have been government-issued or sold by Home Depot, and subsequently allowed to fall into a state of neglect. Wright has a longstanding fascination with modular systems and articulated connections 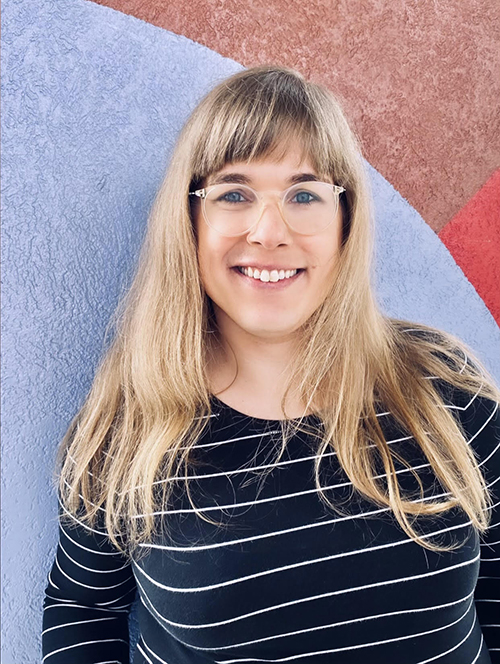 Chelsea Thompto is a transdisciplinary artist working at the intersections of art, trans studies, and technology. Her work explores technologies of visualization with a particular focus on their relationship to trans bodies. She serves on the Board of Directors of the New Media Caucus and the Editorial Board of the Media-N: Journal of the New Media Caucus.

Her work has been exhibited nationally and internationally including exhibitions at Smack Mellon in Brooklyn NY, Spektrum in Berlin, Germany, Woman Made Gallery, Chicago, IL, and more. In 2019 she was a Toolmaker In Residence at Signal Culture in Owego, New York. She received an MFA and MA in 4D Art and an MA in Gender and Women's Studies from the University of Wisconsin Madison. 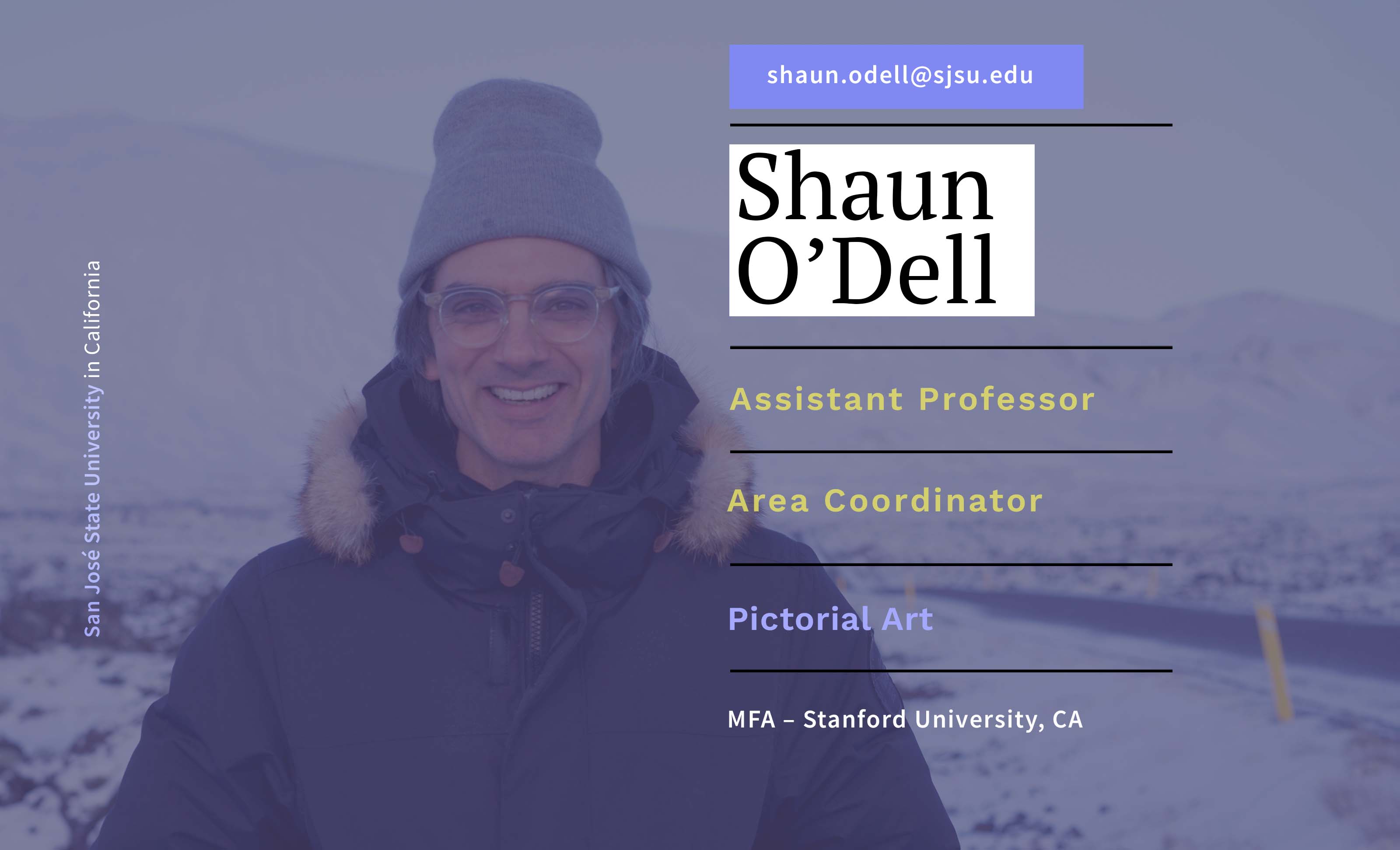 Shaun O’Dell received a BA from the New College of California, San Francisco, in 2002 and an MFA from Stanford University in 2004. His work explores the intertwining realities of the human and natural orders.His work has been exhibited widely in the US and internationally. O’Dell is represented in New York by Susan Inglett Gallery, in Houston by Inman Gallery, and in San Francisco by Gallery 16 and on Long Island by Halsey/McKay. He has won numerous awards and honors including the Tournesol Award (2009, Headlands Center for the Arts), Diebenkorn Teaching Fellowship (2006, SF Art Institute), Artadia Award (2005, San Francisco) and The Fleishhacker Foundation Award in 2002 . His work is included in a number of permanent collections, including the Museum of Modern Art, NY, the Whitney Museum of American Art, the Bronx Museum of Arts, the de Young Museum, the San Francisco Museum of Modern Art, Berkeley Art Museum and the DESTE Foundation of Contemporary Art, O'Dell lives and works in San Francisco.

Adam Shiverdecker (b. 1980, Arcanum, Ohio) is an artist and educator living in Berkeley, California.

He has held multiple artist residencies, including The Archie Bray Foundation, Greenwich House Pottery, and the Tyler School of Art. His work has been shown widely, including recent exhibitions at Museum of Craft and Design, Everson Museum of Art, The Nelson-Atkins Museum of Art, and San Jose Institute of Contemporary Art. Adam is currently Associate Professor of Spatial Art at San José State University.

Dr. Sarah Mills is an assistant professor of art history, specializing in modern design and contemporary art. She teaches courses across departments of Design and Art and Art History in the BA/BFA and MA/MFA programs.

Her teaching interests include craft theory, modern design history, speculative design, textiles and technology, conceptual art and participatory practices. Her primary research focuses on global textile design, particularly the theory and practice of modern (machine) weaving. Her current book project asks how plastic, a kind of artificial material intelligence, transformed the practice of weaving in the United States and to what extent these changes altered the status and perception of textile design. Dr. Mills also writes on the field of electronic textiles, “expanded textiles” or fiber design in contemporary art, and intersections between technology and materiality. Her work has been supported most recently by a fellowship at the Museum of Applied Arts and Sciences in Sydney (2022), a Chester Dale fellowship at the Metropolitan Museum of Art (2018 - 2019) and awards from the Decorative Arts Trust, the Classical American Homes Preservation Trust, and the Graduate Center, City University of New York, where Dr. Mills completed her M.Phil and PhD. Sarah has lived abroad in Minsk, Berlin, Konstanz, Corrientes, and Cape Town, which she considers critical to her worldview.