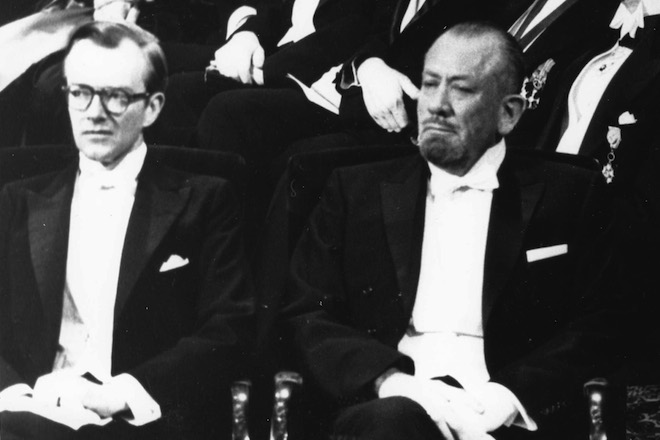 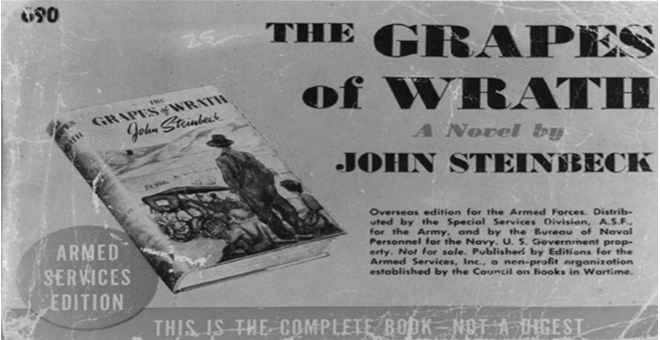 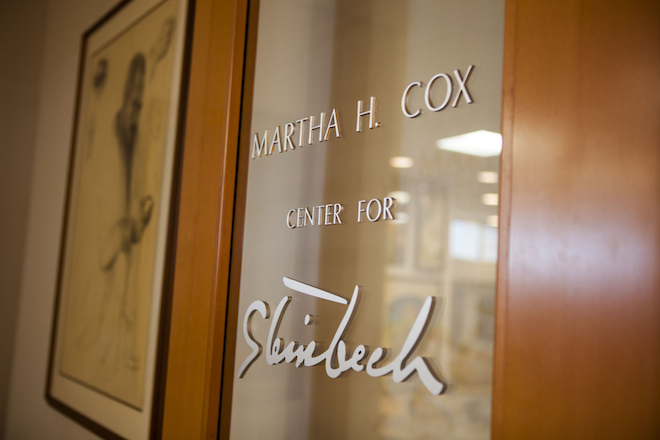 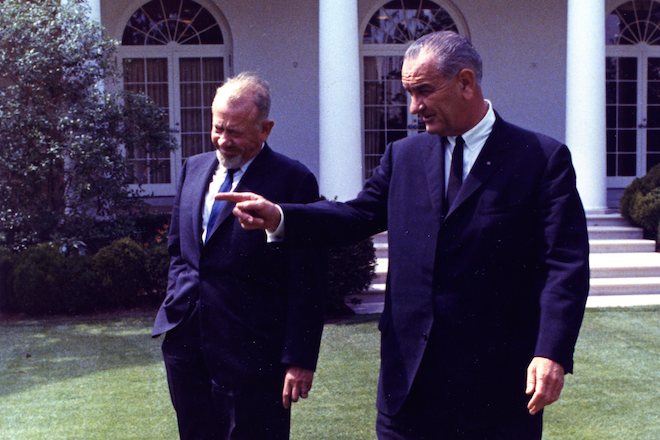 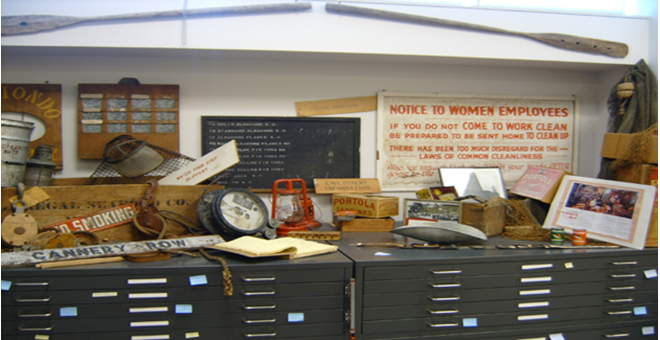 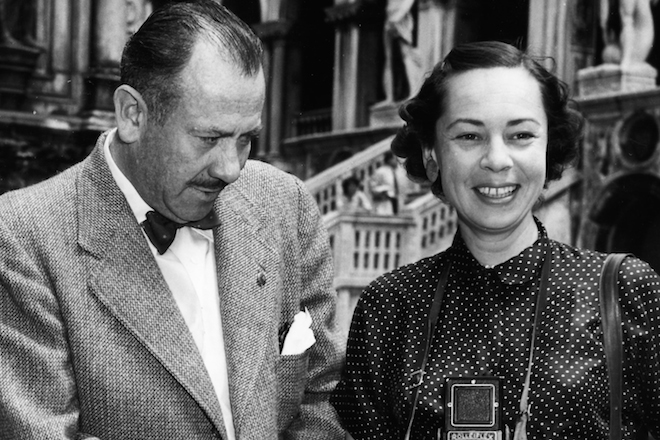 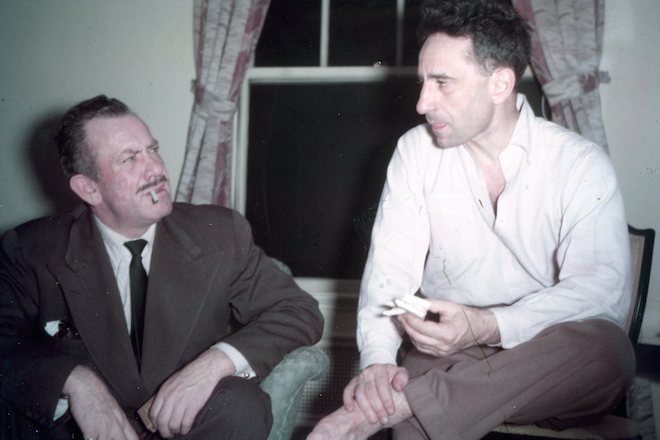 Steinbeck at the 1962 Nobel Prize awards in Stockholm. To the left is Maurice Wilkins, winner of the Nobel Prize in Medicine.

The Grapes of Wrath

The cover of a World War II era Armed Services edition of The Grapes of Wrath. 2014 marked the 75th anniversary of the publication of Steinbeck's 1939 Pulitzer Prize winning novel.

The door of the Center for Steinbeck Studies

The Center is the largest publicly-accessible university archive of Steinbeck materials in the world.

Steinbeck with President Lyndon B. Johnson

This photo was taken at the White House in 1965 after Steinbeck received the Medal of Freedom from President Johnson.

Items from Cannery Row in Monterey California where some of John Steinbeck's works are set.

Elaine and John Steinbeck married in 1950.

This photograph was taken in the early 1950s with Elia Kazan, director of the film version of East of Eden.

In operation since 1973, the Cox Center promotes Steinbeck’s goals of empathy and mutual understanding through public programming, free curriculum for teachers, and fellowships for emerging writers.

The Center for Steinbeck Studies will be open on Mondays and Tuesdays from 1 pm - 5 pm, starting August 10th, or by appointment. Email steinbeck@sjsu.edu to schedule an appointment. Additionally, regardless of vaccination status, masks are required when in the center.

Of Women and Salt, the debut novel by former Steinbeck Fellow Gabriela Garcia, will be published by Flatiron Books on March 30. Congratulations to Gabriela! Get your copy from a local independent bookstore.

The Center for Steinbeck Studies wishes to express its sympathy to the family of Anthony Veasna So, a current Steinbeck Fellow, who died unexpectedly this week. Anthony was a world-class literary talent at the beginning of a spectacular career. His loss is a blow to the literary community of SJSU, the Bay Area, and the world. Anthony's work appeared in The New Yorker, n+1, and many other publications. His first book, Afterparties: Stories, will be published by Ecco Press in August 2021. Anthony will be deeply missed.

Three of the 2020-2021 Steinbeck Fellows -- Tammy Delatorre, Daniel Pearce, and Anthony Veasna So -- read from their work in a free event held on Zoom December 3 at 7:00pm Pacific. Watch the reading on YouTube.

Congratulations to Chef José Andres, who received the 2020 John Steinbeck Award on Monday, November 30. The event was co-sponsored by the Commonwealth Club of California and featured Chef Andrés in conversation with 2004 Steinbeck Award winner Sean Penn and Steinbeck Center Director Nick Taylor. Watch the event on YouTube.

Biographer William Souder presented his new book, Mad at the World: A Life of John Steinbeck (W.W. Norton) on Monday, October 19, 7pm on Zoom. Souder discussed the book and his writing process with Steinbeck Center Director Nick Taylor and answered questions from the audience. A recording of the event is available on the Center's YouTube channel, as well as an audio transcript.

Steinbeck Center Director Nick Taylor participated in an online "tertulia" (seminar) on Steinbeck and Mexico sponsored by UNAM, the National Autonomous University of Mexico. In the YouTube recording, Taylor discusses Steinbeck's deep love of Mexican art, literature, and cinema with Prof. Adela Pineda of Boston University, author of a new scholarly volume on Steinbeck and Mexico.

For those who missed it live, here is the recording of the July 8, 2020, Reading by Black Steinbeck Fellows, featuring L. Rebecca Harris, Carrie R. Moore, Tommy Mouton, and SJSU Professor Keenan Norris.

L. Rebecca Harris (Fellow 2012-2013) is a graduate of the University of California, Berkeley, and the University of San Francisco, where she earned a Master of Arts in Writing. She was an original member of WritersCorp, a unit of Americorps, the domestic Peace Corps program established by President Clinton. Through WritersCorps, she worked on several creative-writing projects with young people throughout the San Francisco Bay Area.  She has taught English and Creative Writing to middle school, high school and community college students. She lives in Oakland, California.

Carrie R. Moore (Fellow 2019-2020) is a graduate of the University of Southern California and Stanford University. She has published her fiction in The Normal School and received the Erica Landis Memorial and Tennessee Williams Scholarships. This fall she will be starting the MFA program at the Michener Center for Writers at the University of Texas.

Tommy Mouton (Fellow 2013-2014) is a graduate of Southern University and San Jose State. His fiction, nonfiction, and poetry have been published in Auburn Avenue, Callaloo, Reed Magazine, and other venues. He currently teaches at Huston-Tillotson University, an HBCU in Austin, Texas.

Read Marcus Mumford's speech, delivered at the 2019 Steinbeck Award ceremony, about the influence of John Steinbeck in his thinking about justice, power, and community.

Announcing a paid summer program for SJSU students: the Steinbeck / Gentlemen of the Road Service Fellowship brings together a cohort of students from SJSU and Stanford to complete a summer of community service. The overall mission is to respect Steinbeck’s legacy by combining public service and creative writing, and to encourage engaged collaboration between students from the two great universities of “Steinbeck Country."

The Cox Center for Steinbeck Studies and Camino Arts have commissioned a new symphony inspired by El Camino Real, entitled "Camino Chronicles." Symphony Silicon Valley will premiere the work, by the Mexican composer Gabriela Ortiz, during the 2020-2021 season. Read more.

Steinbeck Now: The Steinbeck blog is a not-for-profit, non-commercial educational portal developed to benefit the public. SteinbeckNow.com accepts original articles and art with a fresh, transformative perspective on Steinbeck's life, thought, and persona.