A Brief Chronology of Events in John Steinbeck's Life

by Robert B. Harmon

27 February 1902: Steinbeck born in Salinas, California, the third of four children and the only son of John Ernst II and Olive Hamilton Steinbeck. He spent his childhood and adolescence in the Salinas Valley, later called the "Salad Bowl of the Nation."

Yearbook photo of the Salinas High School track team. John Steinbeck is on the far right in the back row.

1919-25: Attended classes at Stanford University, leaving without taking a degree. During these years, Steinbeck dropped out for several months and was employed intermittently as a sales clerk, farm laborer, ranch hand, bench chemist and factory worker.

November 1925: traveled by freighter from Los Angeles to New York City; worked as a construction laborer and, briefly, for the New York American

1926-28: lived in Lake Tahoe, California and worked as a caretaker for a summer home.

April 1938: Their Blood Is Strong, a nonfiction account of the migrant labor problem in California, published by the Simon J. Lubin Society (San Francisco); May, receives the New York Drama Critics Circle Award for the play Of Mice and Men; September, short story collection, The Long Valley, incorporating The Red Pony (1937), published by Viking (New York), where Pascal Covici became an editor after the bankruptcy of his own firm. 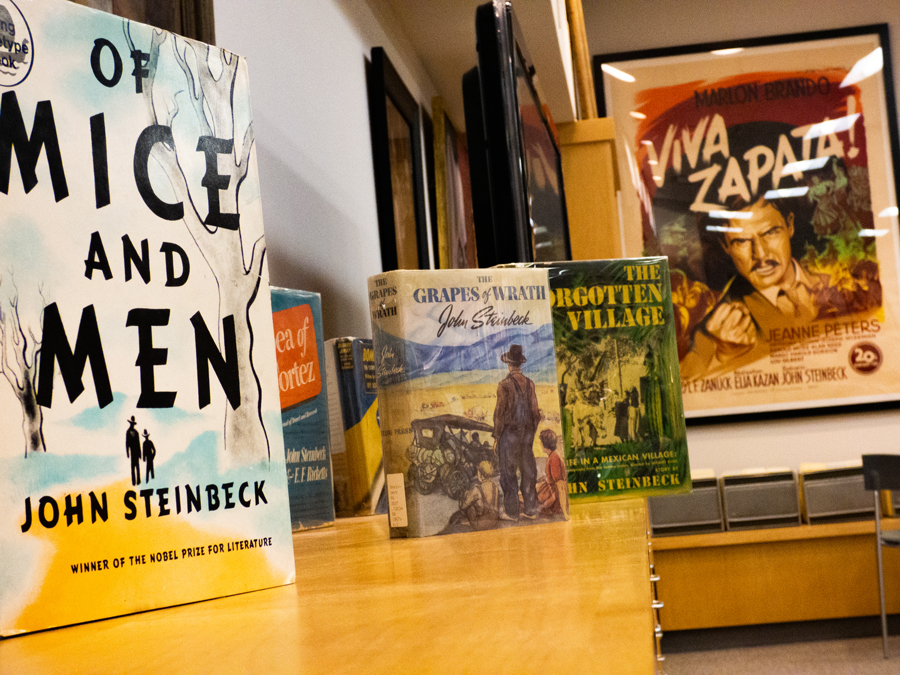 April 1939: The Grapes of Wrath, his greatest critical success, published by Viking, provoking both great popular acclaim and violent political condemnation for its depiction of Oklahoma migrants and California growers, as well as for its alleged "vulgar" language and socialist bias. December, film of Of Mice and Men released.

January 1940: film of The Grapes of Wrath released; March 11 - April 20, marine expedition in the Gulf of California with Ricketts; Spring, receives the National Book Award and the Pulitzer Prize for The Grapes of Wrath; Summer, documentary film about living conditions in rural Mexico, The Forgotten Village.

March 1943: film of The Moon Is Down released; 29 March, marries Gwyn Conger in New Orleans; June-October, in Europe and North Africa as war correspondent for New York Herald Tribune. Divorce from Carol final. 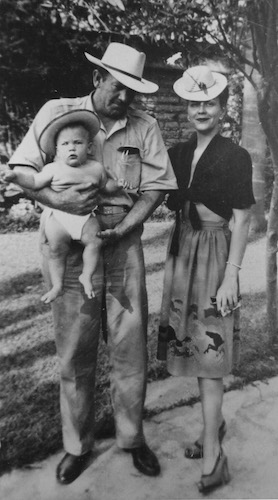 April 1948: A Russian Journal, an account of his 1947 tour of Russia, published by Viking; May, Ed Ricketts killed in automobile accident; August, divorced by Gwyn; December, elected to American Academy of Arts and Letters.

September 1958: Once There Was a War, a collection of his 1943 wartime dispatches, published by Viking.

April 1961: twelfth novel, The Winter of Our Discontent, published by Viking.

July 1962: Travels with Charley, the journal of his 1960 tour, published by Viking; 25 October, Steinbeck is awarded the Nobel Prize for Literature.

14 September 1964: presented with United States Medal of Freedom by President Lyndon B. Johnson.

Some Subsequent Events of Interest

1969: Publication of Journal of a Novel: The East of Eden Letters, journal kept during composition of East of Edenpublished by Viking.

1976: Publication of The Acts of King Arthur and His Noble Knights (edited by Chase Horton), an unfinished translation ofMorte d'Arthur

1979: U.S. commemorative stamp issued on what would have been his seventy-seventh birthday

1989: Working Days: The Journal of The Grapes of Wrath,edited by Robert DeMott (journal Steinbeck kept during writing of the novel in 1938, published on the novel's fiftieth anniversary).

"The Grapes of Wrath, 1939-1989: An Interdisciplinary Forum" held at San José State University.

1992: Gary Sinise and John Malkovich direct and star in another film version of Of Mice and Men; Nantucket conference on "Steinbeck and the Environment," co-sponsored by the Steinbeck Research Center and University of Massachusetts.

1994: Biography by Jay Parini, John Steinbeck: A Biography is published in England by Heinemann.

1995: A revised version of Parini's biography (Henry Holt) and Parallel Expeditions: Charles Darwin and the Art of John Steinbeck by Brian E. Railsback (University of Idaho Press) are published.

1997: "Beyond Boundaries: Steinbeck and the World," the Fourth International Steinbeck Congress, held in San Jose and Monterey in March. Co-sponsored by the Center for Steinbeck Studies and the Japanese Steinbeck Society.

2007: On-line bibliography of secondary sources, with over 7,000 articles, goes live.

2009: A John Steinbeck Reader: Essays in Honor of Stephen K. George, edited by Barbara A. Heavilin, published by Scarecrow Press.

2012: Steinbeck in Vietnam: Dispatches from the War, edited by Thomas E. Barden, published by University of Virginia Press.

About Robert B. Harmon

John Steinbeck and Newsday with a Focus on 'Letters to Alicia': An Annotated and Documented Reference Guide.

John Steinbeck and the Saturday Review: An Annotated and Documented Guide to Information Sources.

John Steinbeck and the Louisville Courier-Journal: An Annotated and Documented Guide  to Information Sources.