Steinbeck lived in a number of locations in California and New York.

Built in 1897 by J. J. Conner, the two-story frame dwelling is located in Salinas, California two blocks west of Main Street on the corner of Central Avenue and Stone Street. The house was purchased by Steinbeck's parents in 1900, and he was born in the bedroom to the left of the entrance way on 27 February 1902. John grew up here, occupying an upstairs bedroom that overlooked Central Avenue. After Steinbeck's parents passed away in the middle 1930s, the house was sold to Mrs. Marie Koenecke Klute. The Klutes resided there until 1953, after which the home was unoccupied except for an occasional tenant. In 1967 when Mrs. Klute passed away, the house was entrusted to the Hartnell College Newman Foundation as a center for the Newman Club. Student members took on the task of renovating the house which was dedicated on 20 December 1969. The Newman Club used the house as a student residence and meeting hall. In 1971 the club sold the house to the Valley Guild of Salinas, a women's organization, and the home was converted into a restaurant staffed by volunteers. It serves lunches weekdays and Saturdays. Visit The Steinbeck House Website for menus, hours, and further background information. 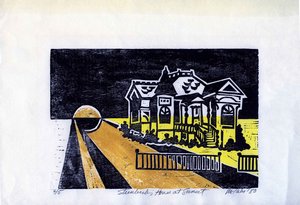 Steinbeck's House at Sunset, a woodcut donated to the Center by Lee Richard Hayman. 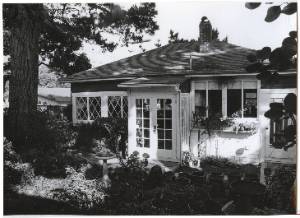 In 1903 John Ernest Steinbeck, Sr. built a small three-room summer cottage painted reddish brown at 147 Eleventh Street in Pacific Grove, California. This house was used by the Steinbeck family as a summer vacation home. Steinbeck lived in this cottage periodically from 1930-1936 with his first wife, Carol, as he struggled to become a successful writer. He returned to the house to live at various times in the 1940s.

In May 1936, John and Carol Steinbeck purchased a 0.663 hectare plot of land in what was then Los Gatos, California (now Monte Sereno). Carol designed a small, 139 square meter home, built in summer 1936 and the first home owned by Steinbeck. To insure his privacy, Steinbeck built an 250cm-high grape stake fence around the property. On the entrance gate he placed a carved wooden plaque, "Arroyo del Ajo" (Garlic Gulch). While living in this house, Steinbeck completed Of Mice and Men and wrote much ofThe Grapes of Wrath. There he entertained guests such as Burgess Meredith and Charlie Chaplin. Because other homes were being built close by to the Steinbecks, they began to lose their privacy. Consequently they moved again, selling this house in September 1938. In December 1989, this house was added to the National Historic Registry. Steinbeck had built the house for approximately $8,000; it sold in 2004 for $5,600,000.

The Steinbecks started looking at secluded real estate by mid-summer of 1938, in the midst of Steinbeck's work on The Grapes of Wrath. They settled on the Biddle ranch, a 19 hectare spread in the Santa Cruz Mountains above Los Gatos, California. After selling their property on Greenwood Lane, the Steinbecks moved into the existing old farmhouse while their new home was being built. Construction of the home began early September 1938 and was completed by December. While they lived in this house, their marriage was deteriorating. John and Carol separated in April 194l, and the property was sold in August 1941. 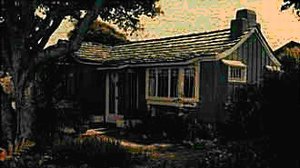 April 1941 April, after his separation from Carol, Steinbeck purchased a small house on Eardley Street in Pacific Grove, California. He spent time with Ed Ricketts at the lab, which was less than 1km away. During his stay in this house, he worked on Sea of Cortez and a screenplay (The Forgotten Village). After his divorce from Carol became final in 1943, John married Gwyndolyn Conger and they moved to New York City. 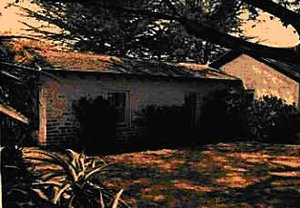 The Lara Soto Adobe is on Pierce Street in Monterey, California. In October 1944, Gwyn and John Steinbeck moved back to Monterey. Steinbeck had admired this old adobe home from his youth, but his delight in his new house was short-lived. Because of the cool reception he received in Monterey, John and Gwyn and their baby boy, Thom, moved back to New York City.