John Steinbeck won the Nobel Prize in Literature in 1962. According to the Nobel Prize Committee, Steinbeck was awarded this honor "for his realistic and imaginative writings, combining as they do sympathetic humour and keen social perception." Steinbeck received the award at Stockholm City Hall on Monday December 10th. Fellow Award winners include the chemist Linus Pauling, who earned the Peace Prize, and James D. Watson, a molecular biologist who first proposed the double-helix structure of DNA. 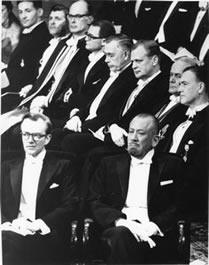 Steinbeck and professor Maurice Wilkins (Nobel Prize for Medicine) sitting next to each other at the Nobel Prize ceremony in 1962, listening to Doctor Arne Tiselius, president of the Nobel Foundation.

I thank the Swedish Academy for finding my work worthy of this highest honor. In my heart there may be doubt that I deserve the Nobel Award over other men of letters whom I hold in respect or reverence—but there is no question of my pleasure and pride in having it for myself.

It is customary for the recipient of this award to offer scholarly or personal comment on the nature and direction of literature. However, I think it would be well at this particular time to consider the high duties and responsibilities of the makers of literature.

Such is the prestige of the Nobel Award and of this place where I stand that I am impelled, not to speak like a grateful and apologetic mouse, but to roar like a lion out of pride in my profession and in the great and good men who have practiced it through the ages.

Literature was not promulgated by a pale and emasculated critical priesthood singing their litanies in empty churches - nor is it a game for the cloistered elect, the tin-horn mendicants of low-calorie despair. Literature is as old as speech. It grew out of human need for it and it has not changed except to become more needed. The skalds, the bards, the writers are not separate and exclusive. From the beginning, their functions, their duties, their responsibilities have been decreed by our species.

Humanity has been passing through a gray and desolate time of confusion. My great predecessor, William Faulkner, speaking here, referred to it as a tragedy of universal physical fear, so long sustained that there were no longer problems of the spirit, so that only the human heart in conflict with itself seemed worth writing about. Faulkner, more than most men, was aware of human strength as well as of human weakness. He knew that the understanding and the resolution of fear are a large part of the writer's reason for being. This is not new. The ancient commission of the writer has not changed. He is charged with exposing our many grievous faults and failures, with dredging up to the light our dark and dangerous dreams for the purpose of improvement.

Furthermore, the writer is delegated to declare and to celebrate man's proven capacity for greatness of heart and spirit - for gallantry in defeat, for courage, compassion and love. In the endless war against weakness and despair, these are the bright rally flags of hope and of emulation. I hold that a writer who does not passionately believe in the perfectibility of man has no dedication nor any membership in literature.

The present universal fear has been the result of a forward surge in our knowledge and manipulation of certain dangerous factors in the physical world. It is true that other phases of understanding have not yet caught up with this great step, but there is no reason to presume that they cannot or will not draw abreast. Indeed, it is part of the writer's responsibility to make sure that they do.

With humanity's long, proud history of standing firm against all of its natural enemies, sometimes in the face of almost certain defeat and extinction, we would be cowardly and stupid to leave the field on the eve of our greatest potential victory.

Understandably, I have been reading the life of Alfred Nobel; a solitary man, the books say, a thoughtful man. He perfected the release of explosive forces capable of creative good or of destructive evil, but lacking choice, ungoverned by conscience or judgment.

Nobel saw some of the cruel and bloody misuses of his inventions. He may have even foreseen the end result of all his probing--access to ultimate violence, to final destruction. Some say that he became cynical, but I do not believe this. I think he strove to invent a control--a safety valve. I think he found it finally only in the human mind and the human spirit.

To me, his thinking is clearly indicated in the categories of these awards. They are offered for increased and continuing knowledge of man and of his world—for understanding and communication, which are the functions of literature. And they are offered for demonstrations of the capacity for peace—the culmination of all the others.

Less than fifty years after his death, the door of nature was unlocked and we were offered the dreadful burden of choice. We have usurped many of the powers we once ascribed to God. Fearful and unprepared, we have assumed lordship over the life and death of the whole world of all living things. The danger and the glory and the choice rest finally in man. The test of his perfectibility is at hand.

Having taken God-like power, we must seek in ourselves for the responsibility and the wisdom we once prayed some deity might have. Man himself has become our greatest hazard and our only hope. So that today, saint John the Apostle may well be paraphrased: In the end is the word, and the word is man, and the word is with man.