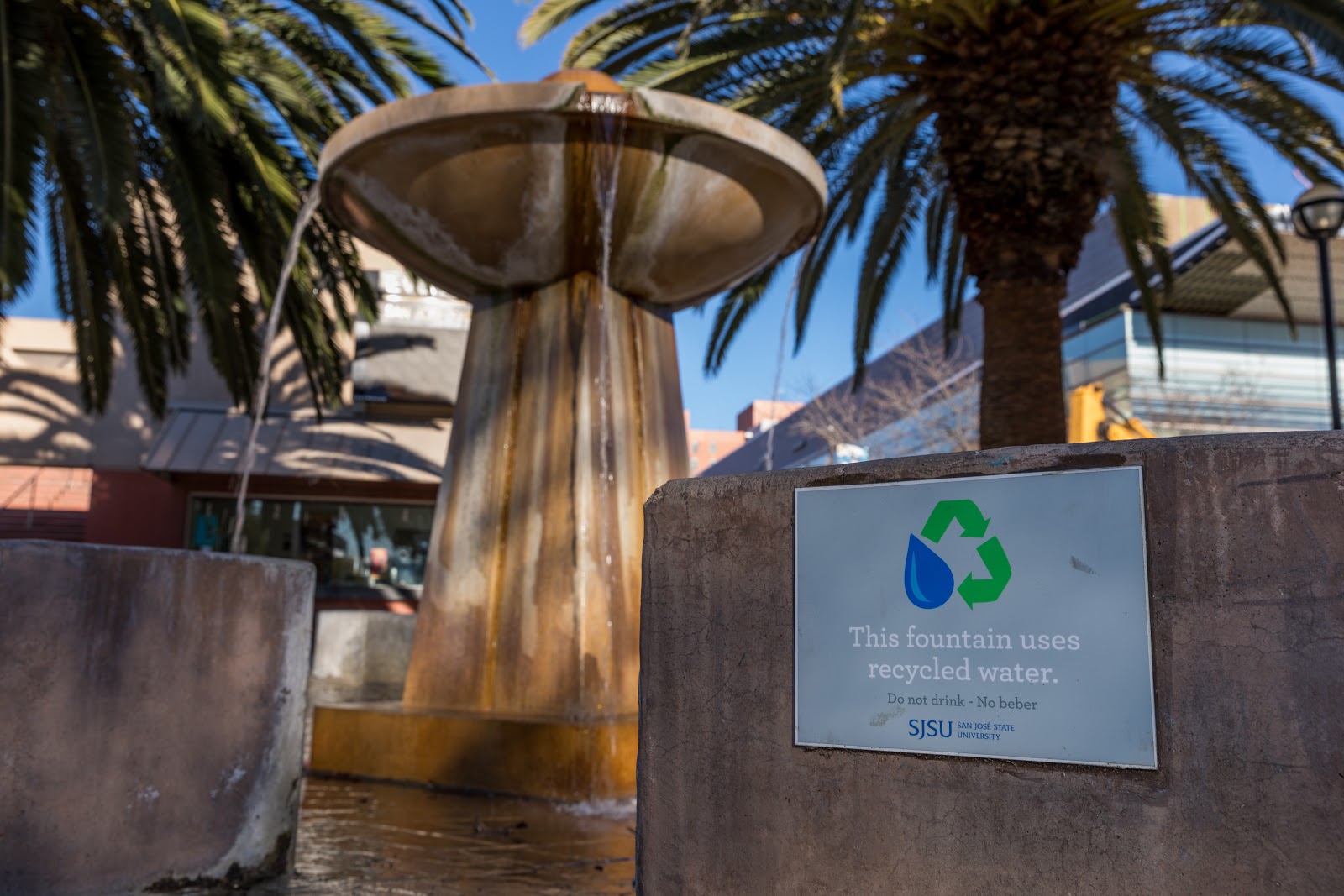 SJSU was one of the first users of recycled water on the SBWR system and continues to transition services to the system. For the last 20 years, buildings have been planned and constructed with recycled water in mind, and incremental infrastructure improvements that facilitate expanded use of recycled water on campus have been made by both SBWR and SJSU. The campus has more than 20 years of experience with recycled water project planning, construction, staff development, annual cross‐control testing, and four year certifications. In keeping with CSU Executive Order 987 the campus strategic plan for development of the reclaimed water includes execution of operations driven projects that enable new construction to have the resource available when needed.

Since the late 1990’s the campus has taken steps to plan for conversion of campus irrigation to recycled water, starting with the installation of a new 8” water main loop in 1998. This project helped the campus lay the groundwork for recycled water use through improved cross control protection, and by dedicating an entire campus distribution loop to irrigation service.

In 2011, the main campus irrigation was converted to reclaimed water. The plants for the landscape master plan were determined after identifying two constituents of recycled water, salinity and boron. Recycled water for irrigation averages over 70,000 CCF annually.

In 2000, recycled water use was approved for use at SJSU’s Central Plant. The recycled water is used as make‐up water for the campus chiller plants cooling tower, and replaced the softened potable water previously used as cooling tower make‐up. Through water chemistry improvements over the years, and installation of a multi‐function chemical controller in 2007, water use in the towers today is less than what it was prior to the conversion when softened potable water was used as make‐up.
The use of recycled water for boiler feed at the Central Plant eliminates the single remaining largest potable water usage at San Jose State University. Use of reclaimed water as a source for steam make‐up is an ambitious technical challenge due to the high purity required. The project to convert steam makeup water was completed in October 2017, we converted our existing boilers that generate steam from potable water to recycled water, using our existing reverse osmosis (RO) equipment, saving approximately 25,000 CCF annually in potable water usage.
The amount of potable water used on campus has been reduced by 43% since 2013, saving the campus almost $850,000 in water costs and over 110 million gallons of water annually.

Facilities Development and Operations (FD&O) implemented a new water metering system at the beginning of the Fall 2018 semester to monitor water use and to detect leaks in campus buildings and the main water distribution system. Currently, knowledge of leaks only come from observed puddles but the meters will allow FD&O to become aware of leaks in a timely manner and to reduce water waste associated with leaks. Previous water meter projects in other facilities departments have shown that the meters save about 5‐30% of water.

San Jose State University has had source wells on campus since the 1940’s, utilizing the natural aquifers our campus sits on. However, during the construction of Campus Village Phase 2 (CV2), the well was covered by the new construction and we switched to using San Jose Water Company. Facilities Development & Operations (FD&O) began construction of a new well in the Southwest area of campus with the project aiming to be complete in 2021. Converting back to well water will provide potable water to almost 100% of the main campus. Getting water from a source well not only has associated cost savings to the university but also makes us a resilient campus in case of an emergency (resilience is the capacity of a system to survive, adapt, and grow in the face of unforeseen changes, even catastrophic incidents). In case of an emergency, our campus would still have potable water.

SJSU's water fountains using only recycled water were officially turned on after being inactive for 3 years. Last Spring, SJSU received the 2018 Silicon Valley Water Conservation Award for an organization. SJSU was one of the first users of recycled water from the South Bay Water Recycling system. Since receiving a Silicon Valley Water Conservation Award in 2011, the work to reduce potable water use on campus has not slowed down. Connecting the campus to recycled water for irrigation, adding dual plumbing to all new buildings on campus, and switching existing boilers from potable water to recycled water has resulted in saving more than 100 million gallons of potable water over the years.

In 2009, SJSU completed a water fixture retrofit for most of our faucets, showers, toilets and urinals funded by Santa Clara Valley Water District.

Give to the Sustainability Fund