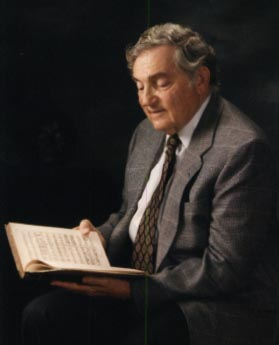 Ira F. Brilliant was born on September 8, 1922, in Brooklyn, New York. He received a Bachelor of Textile Chemistry from Lowell Textile Institute (now the University of Lowell) in 1943. During the Second World War, he served in the chemical warfare division of the Army in Europe, working on chemicals that could be impregnated in American soldiers' uniforms to protect them from gas attacks.

Ira married his wife Irma in 1947 and worked in a textile business run by his family. In 1963, the family moved to Phoenix, and Ira began working in commercial real estate in Scottsdale. He formed a company, Southwest Commercial Realty, with a partner that same year. He retired from beginning new projects in the late 1990s.

Ira always respected and loved Beethoven's music, evidenced by his decision to take the woman who would become his wife on their first date to a Beethoven concert. In the 1970s, his interest in the composer deepened.  He read the essential Beethoven literature for several years and began collecting Beethoven manuscripts and first editions in 1975.

Mr. Brilliant formed relationships with the most important antiquarian dealers in Europe to build his collection, and with their help assembled the finest collection of Beethoven first editions in private hands by 1983. Resolved that the editions should be used by students to enrich their understanding rather than sitting in the special conservation closet he had had built for them, Mr. Brilliant first attempted to give the collection to Arizona State University, which declined the gift.

He next spoke to Arlene Okerlund, then the Dean of the College of Humanities and the Arts at San José State University, and the collaboration to build the first center devoted to Beethoven in the Western hemisphere was immediately launched with great enthusiasm on both sides.

The Ira F. Brilliant Center for Beethoven Studies at San Jose State University officially opened in September 1985 with a gala co-sponsored by the San Jose Symphony. Building on Ira Brilliant's original donation, the Center now has the largest collection of Beethoven materials outside of Europe.