This fortepiano was purchased for the Ira F. Brilliant Center for Beethoven Studies from Pamela Emerson of Woburn, Massachusetts in May 2006 by a select group of donors to the American Beethoven Society. Based on its serial number, the instrument was made in 1823.

According to information received from David Hunt (see his website http://www.fortepiano.co.uk for a registry of Broadwood grand pianos), the instrument was first sold on January 9, 1824. The instrument was later sold by Zug in Switzerland and by Sotheby’s, London, in June 1978 (lot no. 59, price: 1,600 pounds). Ms. Emerson acquired the instrument in 1997 from Edwin Beunk and rented it for recording sessions in her studio and on rare occasions to other venues.

The Broadwood is a grand fortepiano contained in an oak-jointed, framed case with dark stringing on the exterior surfaces. It is 98" long by 49" wide by 36" high with a case depth of 12".

The case retains the squared-off design of the early harpsichord, having a three-parts hinged lid with the usual three brass lid latches on the cheek and bent side. The whole is raised on four turned ballaster legs in mahogany with casters.

Two wood foot pedals are mounted on a wood suspended lyre, controlling damper sustain and una-duo chorda shift. The case work is in fine restored condition. A serial number—9644—and the date "1823" are stamped into the wrest plank.

A plaque above the keyboard, inlaid into the name board, has the following inscription: "John Broadwood and Sons, Makers to His Majesty and the Princesses, Great Pulteney Street, Golden Square, London."

This fine instrument is in fully restored playing and tuned condition having been through a conservatively conducted restoration in the Netherlands. It has been professionally used in both public concerts and in recording studios.

Recordings on the Broadwood Fortepiano

Beethoven and the Broadwood Fortepiano 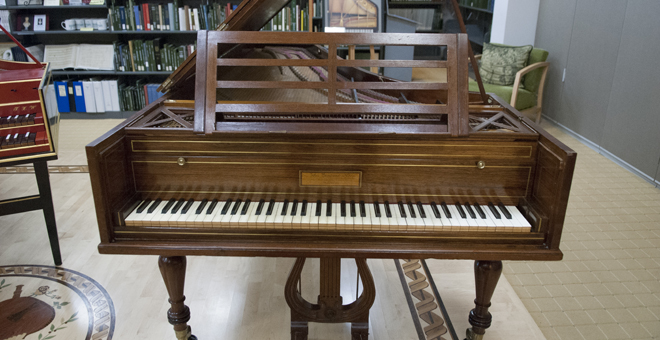 Beethoven owned a Broadwood fortepiano built in 1817, a gift from Thomas Broadwood who had met Beethoven in Vienna in the summer of that year. Broadwood asked five fortepianists living in London to help him select the appropriate instrument and had the names of these men engraved on a plaque. The keyboard of Beethoven's Broadwood spanned six octaves (CC to c''''), slightly narrower than the Beethoven Center's 1823 instrument.

The Journey of Beethoven's Broadwood Fortepiano 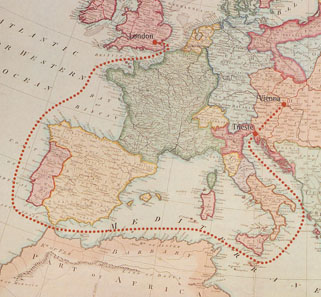 In December 1817, Broadwood shipped the instrument from London. It arrived in Vienna seven months later slightly damaged after an arduous journey over sea to Trieste, then by cart into Vienna.

Beethoven enlisted his friend, the Viennese piano builder Nanette Streicher, to make the necessary repairs. Beethoven kept the instrument at his home in the Schwarzspanierhaus until his death in 1827, and it was then sold to C. Anton Spina, a music publisher.

In 1845, Spina gave the instrument to Franz Liszt who kept it in his home in Weimar until he donated it to the Hungarian National Museum in 1874. In 1991, Beethoven's Broadwood was restored to playable condition and was featured in a tour with the fortepianist Melvyn Tan.