The Center currently owns over 300 first editions of Beethoven’s music, the largest collection in North America. Ira Brilliant was particularly interested in first editions and helped the Center acquire a comprehensive (but not complete) collection.

The Center owns first editions of all of Beethoven’s string quartets and most of the piano sonatas, as well as first edition scores (and some parts) of all nine symphonies.

All of the Center’s first editions are listed in the library’s online catalog, and some are included in the Digital Collections.

The oldest first editions in the Center’s collection are for two of Beethoven compositions from his youth in Bonn: the song “Schilderung eines Mädchens,” WoO 107, and the Rondo in C major, WoO 48. These first appeared in the monthly musical magazine, Blumenlese für Klavierliebhaber, published in 1783. The first editions of Beethoven’s early works are particularly important sources as most of his autograph manuscripts for these works are lost.

An example of one of the rarest of these editions is an early printing (probably a proof copy) of the Piano Sonatas, Opus 2, nos. 1-3 (Vienna: Artaria, 1796). Our Curator, Patricia Stroh, published a study comparing variant printings of the first editions of these sonatas in the journal Notes in December 2000.

Errors in first editions often led to revised reprintings from the same plates. The Center owns variant printings of some first editions that reveal these corrections. One particularly curious mistake appears in the Center’s exemplar of the first edition of the Piano Sonata in F major, Opus 54, in which page 4 is printed upside down!

Other differences between copies of first editions may include slight changes in the title page, such as the publisher’s statement or price, or the presence (or absence) of a list of subscribers or publisher advertisement. For example, the first edition of the score of the Ninth Symphony owned by the Beethoven Center contains a list of heads of state, music dealers and publishers, and individuals who acquired copies.

Intact sets of parts for orchestral music are particularly rare. The Center owns a few of these complete sets in the first editions, including Beethoven’s piano version of the Violin Concerto, Opus 61, the Fifth Symphony, the Coriolan Overture, and several others. In some cases, the parts were still bound together with string and are in pristine, unused condition. Ira and Irma Brilliant were particularly pleased to acquire such a set of first edition parts for the Piano Trios, Opus 1, which was presented to the Beethoven Center on the occasion of their 50th wedding anniversary in 1997.

The Center’s extensive collection of scores includes over 2,200 early editions (from Beethoven's lifetime and later 19th-century editions) of individual works. These editions are particularly important for study of nineteenth century publishing and performance practices and the reception of Beethoven’s music in other countries.

Among these early editions are scores that appeared in London and Paris shortly after the first edition of the work was printed in Vienna or Leipzig. Beethoven authorized some of these English editions, such as the printing of the Bagatelles, Opus 119, by Clementi in 1823, which was the first printing of the complete set of all eleven numbers. The Beethoven Center owns over 200 English editions of Beethoven’s music printed in his lifetime.

German publisher Simrock issued his Beethoven editions in Paris beginning in the first decade of the nineteenth century, but soon the native French publishers also offered their own engraved editions of Beethoven's most popular works. Among those is this edition of the Pathétique Sonata issued by the firm of Erard around 1800.

Works for Other Instruments

Arrangements of Beethoven’s works for other instruments was quite common during Beethoven's lifetime as well, particularly the solo piano
or piano four-hand versions of chamber and orchestral works. The publisher Steiner issued arrangements of Beethoven's Seventh Symphony, for example, for piano trio and string quintet at the same time that he offered the first edition of the orchestral parts and score. 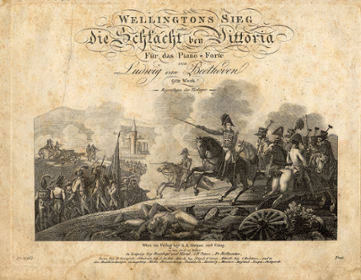 For some works, reprint publishers would issue works with a decorative title page to make them more attractive to potential buyers. This early edition of the piano, four hand arrangement of Wellington's Victory depicts a battle scene on the title page.

Collected editions of Beethoven’s works from the 19th and 20th centuries in the Beethoven Center's collection number about 300. These include the series issued shortly after Beethoven's death by the publishers Haslinger, Dunst, and André as well as collections edited by Moscheles,
Liszt, and many others.

Of a small score collection of music by Beethoven's contemporaries, Daniel Steibelt is particularly well-represented. Most of these are now cataloged in the online catalog, and some are included in “Music by Other Composers” in the Digital Collections.