Replica of a Jean-Louis Dulcken Fortepiano from ca. 1795

This replica of a Jean-Louis Dulcken fortepiano was built by Janine Johnson and Paul Poletti in 1985. The instrument used as a model for the Center's fortepiano is located at the Smithsonian Institution.

The case (which is more decorative than the Dulcken model) and its inner parts are made mostly of wood, which gives the instrument considerable resonance. The woods include basswood, maple, mahogany, Swiss pear, lemonwood, cherry, walnut, spruce, beech, and poplar.

The normal range of the fortepiano of the early Classical period was five octaves. However, this instrument has a range of five octaves and five notes (66 keys, compared to our modern piano's 88), with five keys added to accommodate Beethoven's early period fortepiano works (and some sonatas from the middle period).

The hammers are covered in leather, and the thin strings (comparable to harpsichord strings) run straight across a wooden sounding board, without support by a metal frame. There are two strings for each note, and the strings are roughly half the diameter of modern strings.

On this fortepiano, knee levers rather than foot pedals are used. The right lever lifts the damper rail and the left lever engages the moderator (or mute) stop, which slips a piece of felt in between the hammer and the string. 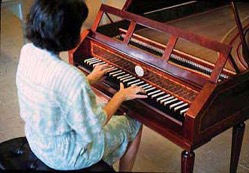 The ebony keys are slightly shorter and narrower than the keys of our modern piano, so large intervals are easier to reach.

Ira and Irma Brilliant commissioned the building of this instrument and gave it to the Beethoven Center in memory of their daughter, Maxine (1952-1962).