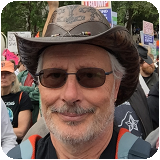 Paul K. Wolber received his undergraduate degree in Chemistry from the University of Michigan in 1973, and his Doctorate in Physical Chemistry from Stanford University in 1980. He was an NIH postdoctoral fellow at U.C. San Francisco, and then joined an agricultural biotech startup, AGS (later DNAP), in 1982. Paul joined the microarray program at Hewlett-Packard in 1996. He worked in R&D at HP and its spin-off, Agilent, until late 2004, when he became head of Microarray Quality Test Development. From 2012 through 2015 years, he also taught a graduate course in Next-Generation Sequencing at San Jose State University. Paul currently manages microarray QC test development, process chemistry and manufacturing data management for Agilent. He has authored or co-authored 36 scientific papers, 29 patents and one work of speculative fiction. In his spare time, he enjoys reading, gardening, hiking and cross-country skiing.