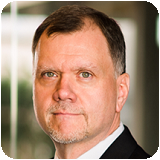 From 2010 to 2017, Rob A. Rutenbar was Bliss Professor and Head of Computer Science at the University of Illinois at Urbana-Champaign, where he was a principal architect of the CS+X initiative. In July 2017, he became Senior Vice Chancellor for Research at the University of Pittsburgh. He received the Ph.D. from the University of Michigan in 1984, and spent the next 25 years at Carnegie Mellon, where he ultimately held the Jatras Chair in Electrical and Computer Engineering. His research has focused in three broad areas:  tools for custom ICs;  nanoscale statistics for chip design; and custom computer architectures.   He’s founded two venture- backed startups, and received several awards for his work, including the 2001 SRC Aristotle Award acknowledging the impact of his students on the US semiconductor industry, and the 2007 IEEE CAS Industrial Pioneer Award. His work has been featured in venues ranging from Slashdot to the Economist magazine. He is a Fellow of the ACM and IEEE.