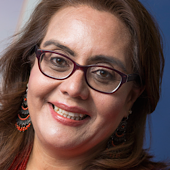 College of Science and Engineering

Professor Leticia Márquez-Magaña, received her BS/MS Degree in Biological Sciences from Stanford in 1986, her PhD in Biochemisty from UC Berkley in 1991, and completed a Post-doctoral Fellowship in Molecular Pharmacology at Stanford in 1994 before joining the science faculty at San Francisco State University. Her experiences as a minority student at these elite institutions engendered a personal and professional commitment to enable underrepresented students to pursue advanced scientific study.

She has served on numerous panels, boards, and advisory councils aimed at achieving this goal. Notably, from 2003-2005 she was a member of a national task force sponsored by the National Science Foundation to study STEM education at Hispanic Serving Institutions, and in 2007 she was an invited participant in the strategic planning process for the organization
in the National Institutes of Health (NIH) responsible for STEM workforce development.

Currently she serves on the Executive Steering Committee for the national diversity consortium because of her role as the Lead Principal Investigator of the SF BUILD (Building Infrastructure Leading to Diversity) project that is funded by a $32 million dollar 10-year grant from the NIH Common Fund. In these leadership roles she relies on her lived experiences, and her 26 years of experience as a research professor at a top minority-serving institution.

At San Francisco State University Dr. Márquez-Magaña has been a highly visible role model, mentor, and advocate for minority students, post-doctoral fellows and junior faculty in the sciences. For her efforts in this regard Dr. Márquez-Magaña was awarded the national Mentor Award in 2001 from the American Association for the Advancement of Science, and in 2013 she was awarded a Bay Area Jefferson Award for her service to science.