Donations and Past Donors

The Martha Heasley Cox Center for Steinbeck Studies has benefited from the dedication and generosity of many individuals and groups over the years. Please consider becoming a supporter and join the Steinbeck Society.

Martha Heasley Cox is the founder and first Director of the Center.

Elaine Anderson Steinbeck donated large tranches of letters and photographs in two separate lots, as well as a 1946 portrait of Steinbeck by his friend Bo Beskow. 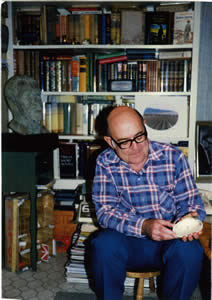 Lee Richard Hayman gave his collection of Steinbeck books and memorabilia, built up over forty years, to the Center in 2004.

Hayman in his Steinbeck Room in 1998.

Joan Baez gave a benefit concert for the Center when she received the "In the Souls of the People" Award in 2003.

Sharon Brown Bacon loaned, then donated, memorabilia and items belonging to her step-mother Carol Henning Brown, Steinbeck's first wife. This collection has given the Center the best collection of Henning materials in the world.

Glenn & Elaine Graves son & daughter of Steinbeck's good friend Glenn Graves, donated their father's scrapbook, which was replete with previously unknown photographs of Steinbeck as a young man, as well as a rare 1919 copy of El Gabilan, the Salinas High School yearbook the year that he and Steinbeck graduated.

Jackson Browne gave a benefit concert for the Center when he received the "In the Souls of the People" Award in 2002.

Sean Penn did a benefit event for the Center when he received the "In the Souls of the People" Award in 2004.

John Sayles gave his 1997 movie Men with Guns its Northern California premiere on 14 February 1998, when he received the "In the Souls of the People" Award.

Bruce Springsteen gave a benefit concert for the Center when he received the "In the Souls of the People" Award in 1996.

James Levitt has given generously to support the activities of the Center for Steinbeck Studies over many years, serving as a consultant and long-time member of the Advisory Board. Mr. Levitt's support led to the development of the Steinbeck in the Schools website and the curriculum it provides.

Susan Shillinglaw, Professor of English and American Literature at SJSU, who directed the Center's activities for more than eighteen years.

Robert Harmon, former archivist and bibliographer for the Center for Steinbeck Studies, has contributed his expertise and time in an inexhaustible measure over many years.

Jeff Holmes, Advisory Board Member, and his company 3Marketeers, have generously supported the development of the website and especially its interactive elements.

Mohammed Khasimi of the Associated Students devoted many hours and days of work to improve this website. The Center and its staff are deeply grateful.

Associated Students of SJSU have provided invaluable financial and technical support for the Center's operations.

English Department of SJSU has provided support since the Center's creation in 1971.

The Center is dependent upon donors for many of its ongoing activities. If you are interested in supporting the work of the Center or finding out more about its activities, please contact us at steinbeck@sjsu.edu or call 408-808-2067. Center Hours and Information.