An Important Message On Athlete Activism 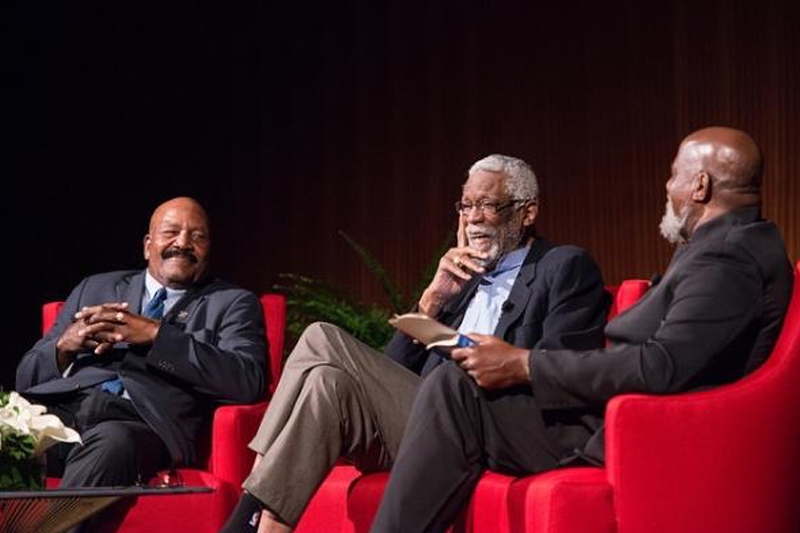 He is one of the most pivotal and influential figures in the last half-century of American sports. Yet you can’t buy his throwback jersey or find his old trading card. He doesn’t have a signature sneaker that enjoys reverence almost 15 years after he last played like Michael Jordan. But few have done more than Harry Edwards, the renowned sociologist, civil rights activist, and inveterate advocate for the black athlete, to change the way athletes are viewed — not just as one-dimensional performers, but as three-dimensional people with beliefs.

As a college athlete-turned-academic, Edwards helped lay the groundwork for today’s athletes who use their playing platform to advocate for civil rights and equality.

He has been kneeling at the concatenation of sports, society, and politics for 50-plus years. A professor emeritus at the University of California Berkeley, Edwards was at Harvard on Wednesday, the guest of Crimson men’s basketball coach Tommy Amaker.

Edwards was on campus to talk to Amaker’s team and take part in a forum at the Kennedy School of Government entitled “From Robinson to Kaepernick: The Evolution of Athlete Activism.” This is like getting Monet to discuss painting or Bill Belichick to discuss coaching. Edwards, 74, has seen the struggle. He has lived it. He knows it’s still very real.

Sadly, the reaction to protesting African-American athletes in 2017 isn’t really all that different than it was 1968, when Edwards was advocating for an Olympic boycott by black athletes to protest racial inequalities at home and abroad. Just ask Colin Kaepernick. They’re regarded as ungrateful, disloyal, spoiled, and un-American. Their message is discounted and disregarded in a tidal wave of outrage and vitriol over its method of delivery. By their nature, protests are intended to be jolting and disruptive. But the backlash seems to come as much from who is doing the protesting than how it’s being done.

Edwards was at the vanguard of the movement for athletes’ rights and for their right to express themselves. He organized the Olympic Project for Human Rights, which led to the iconic protest by American sprinters Tommie Smith and John Carlos on the medal stand in Mexico City in 1968. Smith, who won the gold in the 200 meters, and Carlos, who took the bronze, raised their gloved fists in defiance during the playing of the national anthem. It was a protest that was as divisive then as exiled NFL quarterback Kaepernick’s decision to kneel for the national anthem while a member of the San Francisco 49ers last season.

“The struggle goes on,” said Edwards in a news conference on Wednesday at Harvard. “I’m not surprised at where we are. I’m just gratified that there are young people in the arena and beyond who get it and who have committed themselves to continuing the struggle. In point of fact, if we are going to really make progress towards that more perfect union we have no option. I’m extremely proud of Kaepernick, of Maya Moore, of Tina Charles, of Michael Bennett, of Malcolm Jenkins, of all of these athletes who are stepping up and saying, ‘We have something to say. It’s important.’ When the Constitution says, ‘We the People . . . ’ it doesn’t say, ‘We the People . . . ’ with the exception of athletes.”

Even without Kaepernick in the NFL the anthem protests for the cause of greater equality for African-Americans when it comes to law enforcement and the judicial system have continued this year in the NFL.

If the NFL’s tacit intent was to silence Kaepernick, who was advised by Edwards in the sociologist’s long-standing role as a consultant for the 49ers, it’s not working. Active players have picked up the baton.

Edwards compared Kaepernick to Muhammad Ali, who was stripped of his heavyweight boxing title and banned from boxing after he refused induction into the Army during the Vietnam War.

“There is absolutely no question that Kaepernick is the Muhammad Ali of this era,” Edwards said. “This is not going to go away. Why? Because we haven’t addressed the foundational issues that have driven movements such as this since the end of slavery . . . We continue to paper it over, and then turn around and blame the victims.”

Edwards, who earned a doctorate in sociology from Cornell, has been a consultant for the 49ers since the days of late coach Bill Walsh. He helped the 49ers plan for and deal with Kaepernick’s protest last season. He understands the NFL’s culture.

The NFL is the most patriarchal of sports. It’s a league without fully guaranteed contracts. It’s the league with the most control over its workforce. It’s a sport where “distraction” is a code word for stepping out of line. Coaches fire players in the NFL. In the NBA, it’s the other way around.

It’s the league where the players are the most disposable. It feels like the response to Kaepernick’s protest last season — a method of protest that he has publicly stated he would not engage in this year if he’s on an NFL roster — is designed to reinforce that relationship.

As he has to commissioner Roger Goodell, Edwards pointed to the visual “of an all-white structure lording over an overwhelmingly black gladiator core.”

But he also praised the league for how it handled Seattle Seahawks defensive lineman Michael Bennett’s allegation of excessive force and discrimination by the Las Vegas Metropolitan Police Department in August. The league rebuffed a letter from the Vegas police for the league to investigate Bennett, who has been sitting for the anthem this season, for making false claims.

There have been African-Americans players such as Buffalo Bills running back LeSean McCoy who have said that Kaepernick is not in the league because he’s not good enough. NFL great and longtime community activist Jim Brown has stated that he disagrees with Kaepernick’s method of protest, saying he would not “desecrate” the flag or the anthem. Edwards and Brown go way back in the fight for civil rights and are friends.

“I’m not going to get into a discussion about the method. Jim is in agreement with the goal — to stop some of this insanity between the judicial system and the African-American community,” said Edwards. “I’m not going to deflect that concern by getting into a discussion of Kaepernick vs. Jim on the national anthem. Ain’t nothing going to get between me and Jim Brown, in terms of our friendship, in terms of our love for each other.”

There is room for disagreement on how to accomplish the goal. What there is not room for is silence.

Edwards is never going to just stick to sports.