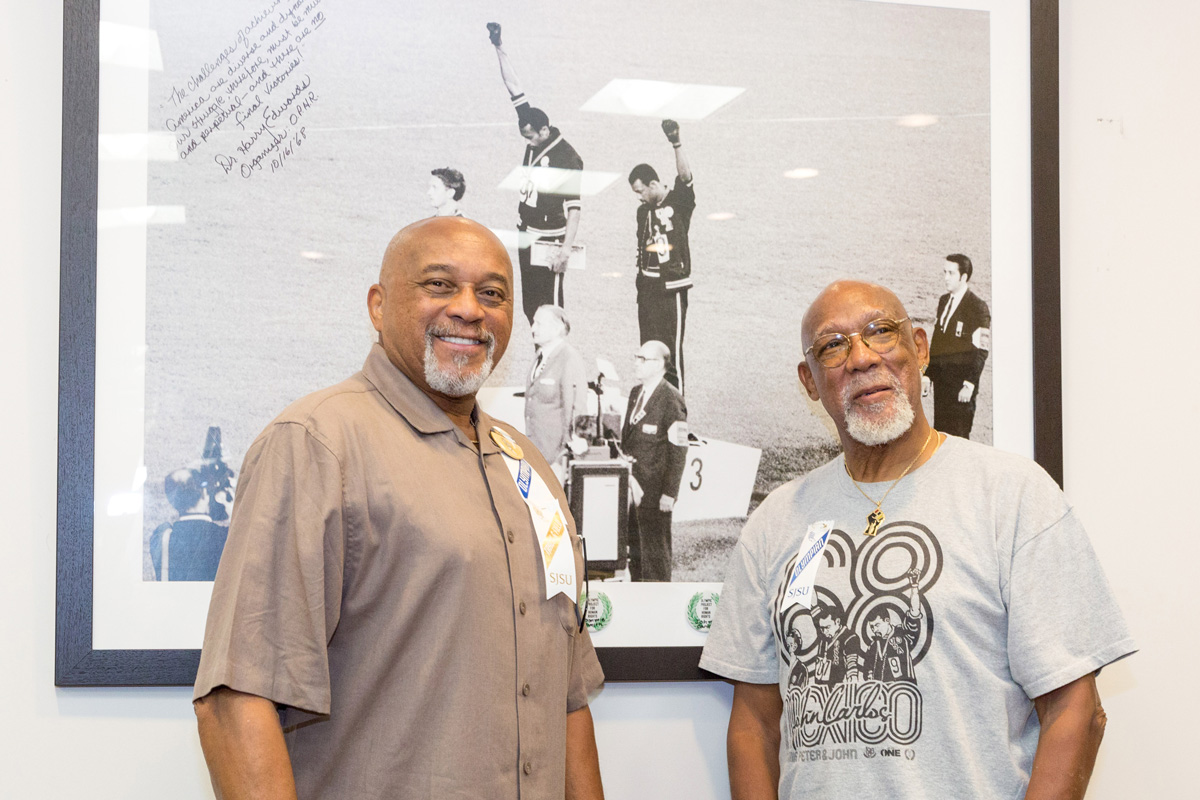 SAN JOSE, CA – San Jose State University alumni Tommie Smith and John Carlos have been named this year’s recipients of the university’s highest honor, the Tower Award. Smith and Carlos will receive the award at San Jose State’s annual Inspiration to Innovation gala, a fundraiser to be held October 18 at the Event Center at SJSU.

“San Jose State University alumni Tommie Smith and John Carlos felt the fate of the nation resting on their shoulders when they made their unforgettable statement in support of human rights and dignity,” President Mary A. Papazian said. “As SJSU marks the 50th anniversary of their courageous act, we seek to recognize these alumni for risking everything to bring worldwide attention to the defining issue of their time, one that still resonates today.”

Smith and Carlos were SJSU track and field team members when they qualified to compete in the 1968 Olympics, held in Mexico City. After earning gold and bronze medals, respectively, they chose to bow their heads and raise gloved fists on the medal stand while the national anthem was played. In doing so, they created their iconic moment in athlete activism during one of the most tumultuous times in modern U.S. history.

From Athletes to Activists

“The Tower Award is given to San Jose State University exemplars whose personal stories embody the grit and determination that make us Spartans,” said Paul Lanning, vice president for University Advancement and CEO of the Tower Foundation. “Without saying one word, alumni Tommie Smith and John Carlos sent a message that reverberated from 1968 through today, and for this they will receive the 2018 Tower Award at SJSU’s annual Inspiration to Innovation gala.”

For what the International Olympic Committee reportedly described as an “outrageous stance,” Smith and Carlos were evicted from the Olympic Village in Mexico City and sent back to the United States. Nearly 40 years later, SJSU student Erik Grotz, who was surprised to learn that Smith and Carlos were alumni, suggested that the campus memorialize their peaceful protest. In 2005, the Associated Students of SJSU unveiled, in the heart of campus, a 23-foot-tall landmark sculpture of the two athletes.

Today, visitors from around the world act on the sculpture’s signature invitation to take a stand by posing in the silver medal position where Australian Olympian Peter Norman stood in 1968, an arrangement discussed with and approved by Norman before his death in 2006.

Between 1941 and 1970, 91 Spartans were ranked in the top 10 worldwide by Track and Field News, 27 were Olympians, and men’s track and field won the NCAA team title in 1969. Smith and Carlos were SJSU track and field team members during this time, when San Jose was known as Speed City, with the legendary Lloyd “Bud” Winter as head coach.

Raised in Texas and California, Tommie Smith, ’69 Social Science, ’05 Honorary Doctorate, coached track and field at Oberlin College, where he also taught sociology, and later at Santa Monica College. He is the author of Silent Gesture: The Autobiography of Tommie Smith.

A native of New York, John Carlos, ’05 Honorary Doctorate, pursued professional football and later worked for the United States Olympic Committee. He is the author, with Dave Zirin, of The John Carlos Story: The Sports Moment That Changed the World, this year’s Campus Reading Program selection.

SJSU is the birthplace of the Olympic Project for Human Rights, a movement led by SJSU alumnus and instructor Harry Edwards, who went on to become a world-renown sports sociologist. The project inspired Smith and Carlos’ now-historic stand.

Edwards, Smith, Carlos and others founded the SJSU Institute for the Study of Sport, Society and Social Change in 2017. The institute seeks to continue the dialogue about athlete activism and the influence of sport in effecting positive social change.