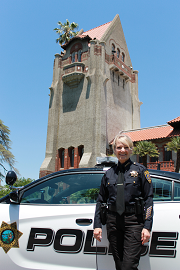 SJSU is an urban campus located on 154 acres in the heart of California's third largest city. From its beginning in 1857 as a teacher's college, SJSU has grown into a thriving community of more than 33,000 faculty, students and staff.

As SJSU grew, so did the City of San José.  Once an agricultural community of a few thousand homes, San José is now the third largest city in California with a population of more than 925,000 people.

In addition to the Office of the Chief, UPD is divided into 2 bureaus:

UPD annually documents about 60,000 incidents, arrests between 800 and 900 suspects and writes about 2,500 reports. The Police Communications Center dispatches UPD personnel to more than 50,000 calls for service each year. UPD and Parking Services personnel annually work more than 200 special events attended by over 500,000 people.