Sliding Rocks on the Racetrack Playa

The Racetrack Basin lies within the boundary of within the basin of Death Valley National Park. Resting on its flat dry lakebed are pebble- to boulder-sized rocks, with masses estimated at up to 320 kilograms (Sharp and Carey, 1976). 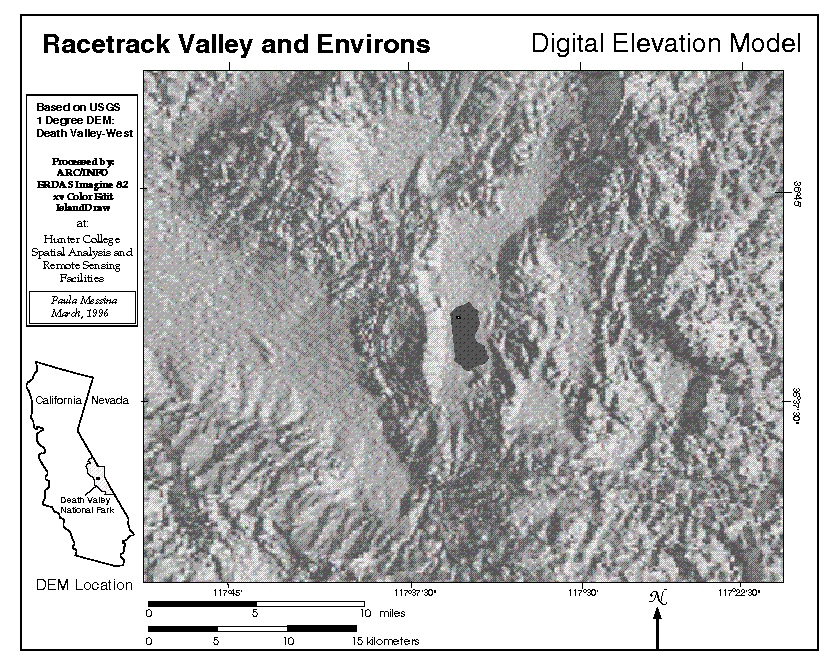 This in itself could be explained by simple mass wasting processes, yet the position of the rocks, often hundreds of meters from a source area, and the presence of furrows in the clay playa surface leading toward the rocks suggests that the rocks are moving by traction.

Trails created by the rocks vary in length and direction. Some trails show gradual (curving) or abrupt (angular) changes in direction; most trails strike a general south/southwest to north/northeast motion (Kirk, 1952; Sharp and Carey, 1976). Moreover, these strike values are consistent with prevailing wind patterns, thereby suggesting wind as a motive force. The nature of the trails recorded by inferred rock movement indicates that motion occurs only when the playa surface is wet, because smooth, rounded levees form and are preserved as "fossil wakes." Distances traveled of as much as 3.2 kilometers are inferred by the presence of distinctive lithologies far from possible areas of origin. Many rocks appear to break off dolomite cliffs at the south end of the playa, and are ultimately "deposited" where the playa meets an alluvial fan, about 2 kilometers to the north (Sharp and Carey, 1976; Messina, Stoffer and Clarke, 1997).

All sliding rock traces are ephemeral: the smallest ones may not survive a subsequent rainfall, while others produced by the most massive boulders may last no longer than about seven years (Sharp and Carey, 1976). Hence, previous monitoring studies and limited-area maps generated may no longer be valid. Movement appears to be episodic and linked to the occurrence of storms (Sharp and Carey, 1976; Reid et al., 1995). Major "rock slides" are punctuated by stable periods, coinciding with dry conditions on the playa.

Despite years of interest and intermittent research investigations, no one has ever witnessed the rocks in motion. The mechanisms for these unusual events have been hypothesized and in some cases tested, but never proven. Gravity must be ruled out, since the rocks are generally moving slightly uphill (the northern section of the playa is a few centimeters higher than the southern end). 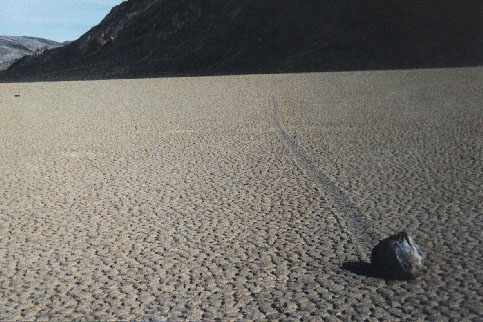 This research project evolved from a natural curiosity about this exceptional aeolian process. It seemed essential to observe the scarred surface in plan view, and to analyze the spatial patterns inscribed by the rocks, particularly in the context of surrounding landforms. Despite the publication of several papers about this oddity, no complete maps of the Racetrack's trails were in existence. Compilation of the first detailed map of the furrows was paramount to a better understanding of the unexplained process responsible for the inferred rock motion.

The Global Positioning System (GPS) uses a constellation of over 24 satellites in precisely-measured orbits around the Earth. It became fully operational on April 27, 1995, providing 24-hour complete coverage of the planet. Mapping all of the sliding rocks using traditional surveying methods would have taken many weeks, many instruments, and a large field crew. The availability of GPS made a complete map of the entire Racetrack Playa trail network a possibility. Paula Messina and Phil Stoffer undertook the project in July, 1996; it took the two researchers just ten days to map every rock's position, and the path of every trail, to an accuracy of about 30 centimeters. 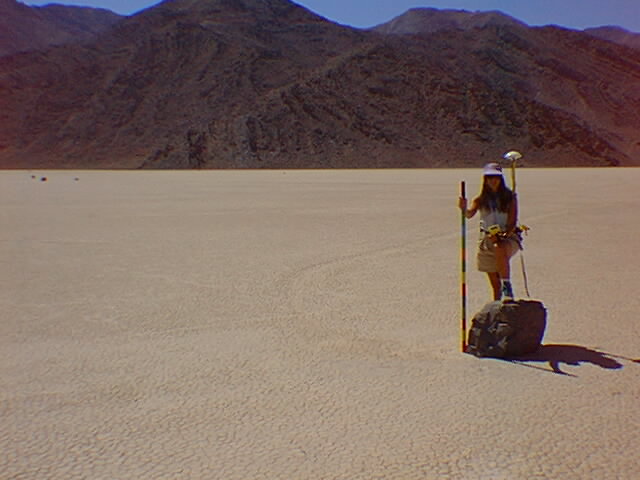 The complete trail map shows the inferred motion of over 100 rocks induced by a pre-1996 sliding rock event.