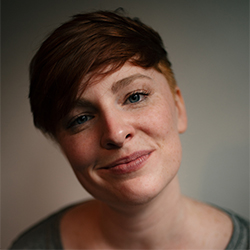 Grace earned her Ph.D. in Political Science at Rutgers University in 2017. She was an American Fellow with the American Association of University Women from 2016-2017 and is Co-Director of the Rutgers University Informed Consent Project. Her book, The Pregnancy Police: Conceiving Crime, Arresting Personhood, is under contract with the University of California Press. Grace has authored several published works, including "The Pregnancy Police: Surveillance, Regulation, and Control," The Gender of Crime (2nd edition), “Informed or Misinformed Consent?: Abortion Policy in the United States,” published in the Journal of Health Politics, Policy, and Law. She has worked as an abortion and birth doula and is involved in practical support work for people seeking an abortion. She also fosters kittens. Grace is involved in public scholarship and featured in Rolling Stone, Rewire News, the Huffington Post, the Associated Press, and on MSNBC.

Give to the Department of Justice Studies