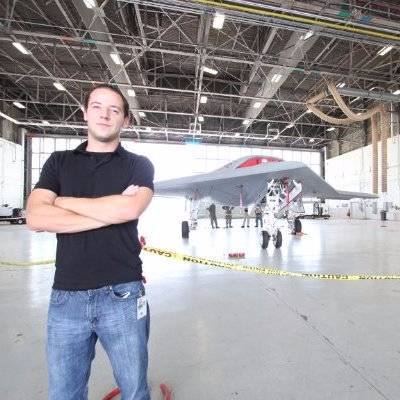 I graduated from SJSU in 2012. After a few months’ worth of online job applications yielded no results, I applied for the Master’s program at SJSU and I started asking around if anyone was hiring. A professor gave me a number to call and urged me to call right away. I said something like, “Thanks, I’ll call tonight…” He responded with, “Call right now.” That call landed me the chance to provide my resume for an intern position at NASA Ames Research Center. I got chosen for an interview and then I got chosen for hire. I interned for 6 months before getting hired full time through Logyx, LLC., a NASA contractor, and after about five years I was hired by NASA as a civil servant.

What do you do at work?

I started my career at NASA with the Contamination Control team for the LADEE spacecraft project. My work transitioned to efforts in support of the Integration and Test team, where I wrote procedures and scripts for spacecraft functionality tests. Eventually I was in the clean room with the spacecraft executing the tests and supporting day-to-day activities. LADEE was the first major spacecraft built at NASA Ames in many years and we had support from some of Kennedy Space Center’s best QA personnel (who worked on the Space Shuttle). LADEE was an opportunity of a lifetime. That project launched and completed its mission successfully.

Since a bit after the LADEE launch, I’ve been working to bring SIERRA to life. It’s a UAS that is large enough to carry up to 100 pounds of science instruments as payload, yet small enough for operations in remote areas with compact runways. Because the project is of relatively small size, I’ve gotten exposure to many of the aspects that go into making the project come together, including CAD modeling, internal structure design, integrated systems testing, troubleshooting, and of course documentation. We hope to have the aircraft in the air supporting science missions soon

In addition to my work with SIERRA, I currently support STPSat-5. STPSat-5 is part of the Space Test Program, which handles spaceflight for the DOD. NASA Ames will handle Mission Operations for the satellite starting next year so we’re working on getting our Ground System prepared to do so. I’m currently supporting development of the Telemetry and Commanding portion of the Ground System.

What are you most passionate about in your work? Why?

I like helping others. I feel like the work we do contributes to projects that shape the future of science and our understanding of the world. Project teams here often feel like a family of hard-working individuals and that environment drives me to do my best work.

How has your SJSU AE experience helped shape your success?

The size of the AE department at SJSU makes it feel like a family. I spent years working with and alongside fellow students, who became good friends. Many of those friends found jobs in the AE industry within the Silicon Valley or elsewhere. Being at the heart of Silicon Valley, SJSU sets students up for networking opportunities that will help them in the future. I also got to know my professors fairly well. That directly shaped my success when one of them put me in contact with a past student who was at an organization with open job positions.

How are you making a positive impact in the world?

NASA in general does new things all the time to advance our understanding of the universe and everything in it. The NASA projects I’ve worked with are no exception. LADEE helped us learn more about our moon but it also demonstrated the first use of the Modular Common Spacecraft Bus, the first use of the Minotaur V launch vehicle, and NASA’s first space laser communications system, LLCD. SIERRA and its airborne science payloads will collect data that can teach us more about our own planet and how it changes with time. Some benefits include improved severe storm forecasting, geophysical monitoring for natural hazards, and air quality assessments. Since SIERRA is unmanned, it can gather data in places where it would be risky for a manned aircraft to fly without endangering the operations crew. In addition to enhancing our understanding of the Earth, the airborne science can help improve or save lives. STPSat-5 will perform measurements in LEO with a sensor suite similar to that of LADEE. The data gathered will help us learn more about the space environment.

What advice do you have for aspiring AEs?

The transition from where you are today to where you want to be after college is something you have to work towards constantly. The curriculum is in place to give you a foundation, but there is so much more to learn. Finishing college is not the end of your learning career. College is merely a prep course. Focus on the things that excite you and put in the extra effort. Make learning and growing your priority. Something just as important as learning is building relationships along the way! When you want to get something done it will be helpful to know people with different skill sets. Build a family with your fellow students and keep it alive even after you graduate. Don’t forget to have fun.