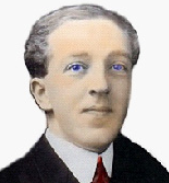 Charles David ‘Doc’ Herrold, (November 16, 1875 – July 1, 1948) was an American radio broadcasting pioneer. Born in Fulton, Illinois, Herrold grew up in San José, California and attended Stanford University where he studied physics and astronomy. When his electrical manufacturing company in San Francisco was destroyed by the 1906 San Francisco earthquake he moved into teaching, and opened the Herrold College of Wireless and Engineering at 50 W. San Fernando St. in San José in 1909 to educate wireless operators. Interested in radio to transmit voice signals, he began broadcasting music and entertainment on a regular basis between 1912 and 1917 to fellow radio enthusiasts, using the callsigns FN and SJN. He had the world’s first regularly scheduled broadcasts, allowing listeners to tune in at a known time. However, in 1917, the US government ordered non-military radio transmissions to cease. After World War I, Herrold obtained the licence for KQW in 1921, but he was unable to maintain the financial requirements, and the station was sold several times. In the 1940s, CBS attempted to buy its then-affiliate in San Francisco, KSFO. KSFO refused to sell, so CBS purchased KQW, moved it to San Francisco and changed the call letters to KCBS. However, Herrold did not profit financially from his pioneering work, and later became a repair technician in the Oakland, California school district, and a janitor in a local shipyard. He died in a Hayward, California rest home, aged 72.