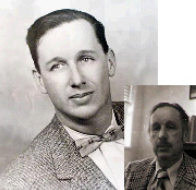 Hal Todd received his B.S Degree at the University of Colorado in 1945. Todd went on to study and earn a Masters Degree at Stanford University in 1950. He then completed his Ph.D. at Denver University in 1954. Dr. Todd came to San José State University in 1964 as Professor of Theatre and Chairman of the Department of Drama. He held that position for eighteen years during which time more than 25,000 students studied and majored in Theatre Arts. During his administration Dr. Todd kept a full teaching load and directed four or five plays a year (including the summer repertory program, children’s plays, and rehearsal/performance productions. Students majoring in Theatre Arts during this period often participated in more than 30 productions during their four-year course of study. The department was considered one of the top ten schools in the country. Dr. Todd’s specialties were acting, directing, and the seminar in Comedy.

The Hal Todd Award for Excellence in Acting was established in 1990 and is given to the Best Actor.