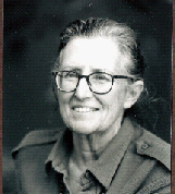 In the theatre field, where everyone spends time creating fantasy worlds, costume designer Eliza Chugg was as real as they come. Eliza helped on countless theatre projects, both student and professioinal, when the producers needed an 11th hour asssit. A respected professional, she was so involved in the theatre that often she alerted an artistic director about an up and coming actor or made a blunt suggestion to a director about how to improve a show. Eliza would be there if you needed her. She would back you up when you needed that, and she would slap you on the back of your head, if you needed that.

The Eliza Chugg Award was established in 1999 by The Theatre Arts Department and is given for Excellence in Artistry and Leadership.