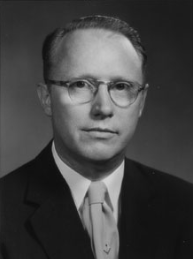 For a number of years, the Crain Award was an international competition open to any new script entry. A number of Crain Award winners were given premiere productions at SJSU. In the 1990s, with the rapid growth of the Department's script writing program, the Crain Award eligibility was changed to apply only to original scripts by SJSU students.

In the fall of 1955, Dr. Harold Cleveland Crain joined the faculty of San José State University as professor and head of the Department of Speech and Dramatic Art. Before he began these duties, he was also appointed as chairman of the Fine Arts Division. This began 21 years of service and teaching at SJSU. He retired as professor emeritus of Theatre Arts in 1976.

Born and raised in Iowa, Dr. Crain was drawn to theatrical arts as a young boy. Following graduation from high school in Humboldt Iowa, he became an actor and manager of a United Chautauqua acting company touring the Middle West in 1929. He then went to Morningside College in Sioux City, Iowa on a scholarship, cooking for a fraternity in exchange for room and board. He used to say that he carried the same nickel in his pocket for four years, existing on scholarship aid. In the summers of 1934 and 1935, he travelled by jumping freight trains to be director of dance productions and assistant director of programs at Canyon Lodge, Yellowstone National Park. During his college years he wrote and directed the Men’s Follies Musical Shows each year. He graduated from Morningside College in 1935. In 1937 he received the Master of Arts degree from Syracuse University and began teaching at Buffalo State Teachers’ College in New York. As a young faculty member, Crain adapted and directed the New York State Fair production of Mendelssohn’s Elijah with a cast of 120 in 1939. His siblings reported that as a boy Harold Crain loved to put on shows and make people smile. He was a high energy performer.

Crain received the PhD degree in Speech and Dramatic Art from the University of Iowa in 1947 and joined that faculty. His mentor and colleague there was the esteemed E. C. Mabie who built the theatre program at the University of Iowa and for whom their theatre is named. During the academic year 1953-54, he received a grant to study theatre in New York and London from the Ford Foundation for the Advancement of Education. He took his wife, Dorothy, and two children along for a nine month adventure. They attended many plays in both New York and London and Crain interviewed playwrights and directors. London was still scarred from the blitz but the theatre scene was alive and well. This experience provided rich insights as to how the commercial professional theatre worked and funded Crain’s teaching for years to come.

Over the years from 1947-1976, Crain directed many plays. Among the approximately twenty that he directed at SJSU were West Side Story, The Beaux’ Strategem, That Woman From Maxim’s (for which he also provided the English translation), The Shrunken Head of Pancho Villa (by Luis Valdez as part of his MFA degree), Riders to the Sea, and Our Town. He published Projects in Oral Interpretation, co-authored with Gladys Lynch, in 1959 (Henry Holt and Company). He was an active member of several professional organizations: the American Educational Theatre Association (serving on the governing board for three years), the Children’s Theatre Conference, the Speech Association of America, the Northwest Drama Conference, and the American Theatre Association. He also served in the community as a member of the San José Concert Series Advisory Board 1955-1962 and as a member of First United Methodist Church of San José.

Crain’s career saw San José State change from its teachers’ college heritage into a university. He was chairman of the department for about 8 years, but “Teaching has always been the great satisfaction,” he told the Spartan Daily May 7, 1976.

Crain’s greatest satisfaction as a teacher has been in seeing his former students ‘make their living’ with the skills he has helped them develop. . . What working in the arts gives to people—to develop their sensitivity, the growth that takes place—is great. Some people think the theatre is an ego trip, but something else is happening that allows them to achieve their potential—something we don’t do if we put all our energies into a 9 to 5 job.

Dr. Crain was a major advocate for interdisciplinary work in the arts. As a director he collaborated with musicians and particularly with Carol Haws, a choreographer. He also helped the university to develop its humanities course and was the first director of that program initiated in the early 1960s.

During the 21 years of his tenure, the department expanded and separated from Speech. More faculty were added. Dr. Crain advocated for the recognition of creative projects as a form of scholarship. This meant that faculty who served in the design fields or in acting and directing could be eligible for promotion to higher faculty rank even when they had not published academic works.

His administrative leadership was highly appreciated as he sought to interpret the work of theatre faculty to the wider university community. It was a golden age for educational theatre.

Harold and Dorothy Crain hosted many gatherings of faculty and students in their home. They were warm and generous people who cared for others as human beings. The fruit of that was friendship that continued over many years with students and faculty colleagues. Crain died in 1979 and is buried in San José.