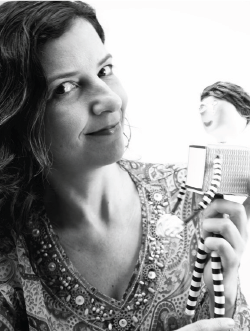 Raquel Coelho (a.k.a Raquel Rabbit) is a Brazilian author, animator an Illustrator. She has published 17 Children's Books in Brazil, and won several prestigious Brazilian awards for her illustration and writing. Raquel has worked as a 3d animator in some of the best US animation studios, such as Laika, BlueSky, Dreamworks and Tippett Studios. She has recently participated in various independent short film projects, was a story consultant for the Dash and Dot robots during the development phase, and has collaborated in AR projects (Augmented Reality) with Tactic Studios, in San Francisco. Raquel Rabbit currently teaches 3D animation in the Animation and Illustration program of San Jose State University, where she also helps with curriculum development and coordination of several of the many extra curricular activities of the program.