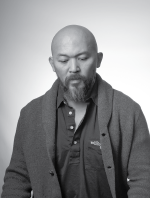 François is currently a creative director at frog’s San Francisco studio. He has a diverse range of industrial design experience with an emphasis on consumer audio products. His career began over a decade ago at Pentagram where he worked with clients such as Microsoft, Coca-Cola, and Dell. Later, he joined Ammunition where he was the lead designer for the original “Beats Studio ” headphones for Dr. Dre, a design that would give rise to the world’s most widely recognized audio brand.

Currently as a creative lead at frog, François is responsible for ensuring high standards of design excellence, overseeing the vision of a projects, managing the team, pursuing new business, managing client relationships, and most importantly, continuing to grow by actively listening and learning. His work continually strives to be emotionally and intellectually engaging through balancing the use of materials, form, finish, poetry, and metaphor.

"Each designer’s process is uniquely shaped by their personal experiences and passions. It is essential to look outside of one’s discipline and “leave the table “ in order to bring back something fresh and original."

His work has been featured in such prominent publications as RollingStone, The New Yorker, and FastCompany. When he is not designing, François is a performing/recording musician and has released two albums of original compositions.