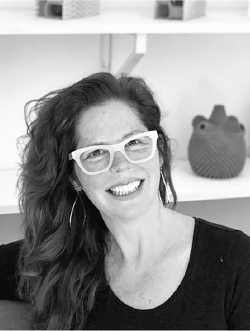 Professor San Fratello is the Chair of the Department of Design in the College of Humanities & Arts. She is an International Interior Design Association Educator of the Year recipient and a recipient of the SJSU early career investigator award given by the Center for Research and Innovation for her work in 3D printing. Her research interests connect local and traditional material practices to contemporary technologies and issues. She is a design activist, author, and thought leader within the fields of additive manufacturing, architecture and interior design. In 2014 her creative practice, Rael San Fratello (with Ronald Rael), was named an Emerging Voice by The Architectural League of New York—one of the most coveted awards in North American architecture. In 2016 Rael San Fratello was also awarded the Digital Practice Award of Excellence by the The Association for Computer Aided Design in Architecture (ACADIA). In 2020 Rael San Fratello received an Art + Technology Award from the Los Angeles County Museum of Art (LACMA).

San Fratello is the co-author of Printing Architecture: Innovative Recipes for 3D Printing (Princeton Architectural Press 2018), a book that reexamines the building process from the bottom up and offers illuminating case studies for 3D printing with materials like chardonnay grape skins, salt and sawdust. She is also a partner in Emerging Objects, a creatively driven, 3D Printing MAKE-tank specializing in innovations in 3D printing architecture, building components, environments and products (a short documentary of their work can be seen here).

San Fratello  earned her Master of Architecture degree at Columbia University in the City of New York. Previous academic and professional appointments include positions at the Southern California Institute for Architecture (SCI_arc), Clemson University, and the University of California Berkeley. Her work has been published widely, including the New York Times, Wired, MARK, Domus, Metropolis Magazine, PRAXIS, Interior Design, Domus, the Architects Newspaper, the  Public Art Review, and recognized by several institutions including: LACMA, The National Building Museum, the Red Dot Design Museum, the Bellevue Museum, For Freedoms, the YBCA 100, and included in the permanent collection of The Museum of Modern Art in New York, The Cooper Hewitt Smithsonian Design Museum, The San Francisco Museum of Modern Art, and the Chhatrapati Shivaji Maharaj Vastu Sangrahalaya Museum in Mumbai.