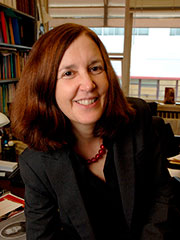 I am presently working on three projects. Two have to do with Auguste Comte, the founder of positivism, sociology, and the Religion of Humanity. I wrote his three-volume biography, published by Cambridge University Press between 1993 and 2009. Two colleagues asked me to join them in editing a book of essays devoted to Auguste Comte. The essay I am contributing to this new book is on Comte’s legacy. For another anthology, The Cambridge History of Modern European Thought, I am writing an essay on the evolution of positivism as a philosophy. Finally, I decided to branch out into cultural history, and last year I started writing a book on the changing meaning of food during times of war. I look at three wars in particular: the Franco-Prussian War, World War I, and World War II.

What personal factors contributed to your studies?

My father was an avid history buff. He graduated from Princeton in 1940 and then was pursuing his doctorate at Stanford when World War II broke out and ruined his plans. He remained, however, a lifelong student of history. Every night, after a long day at work, he read books on medieval history. In the summers, he took my brother and me on trips that fostered our interest in the past. I became hooked as a young girl and have loved history ever since.

It is extremely difficult to teach as much as we do at SJSU and keep to a rigorous writing schedule. Moreover, as a Europeanist, I need to do research abroad and keep up with colleagues at international conferences, especially for intellectual stimulation. In short, there is not enough money for release time and trips.

Teaching has definitely enriched my scholarship. I have learned to explain complex problems in a clear fashion and to explore new areas (such as food) that I have come across in designing new lectures. Students push me to think more deeply.

I am very thorough, self-disciplined, and enthusiastic about doing research. I adore libraries—their scent, mustiness, and odd denizens. When I was thirty, I was at some airport, and a stranger came up to me and said, “I know you. Weren’t you the woman who was always in the stacks at Widener library?” (Widener is the main Harvard library.) Yup, that was me. He worked there and still remembered me from many years before. What a way to leave your mark!

One book that changed your life (or research) and why:

I remember reading Nietzsche’s Will to Power on a ferry boat on the San Francisco Bay when I was a teenager. I was so excited about his ideas that I decided to devote myself to the study of the development of philosophy.

Not to be afraid to tackle big intellectual problems. The challenge is fun and worthwhile.