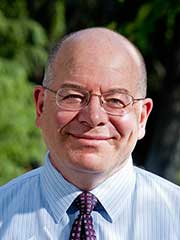 At present I am working on a book on Roman counterinsurgency. The main issue I am exploring is whether the modern understanding of counterinsurgency (and revolution in general) can be applied to ancient times (i.e. are they universal)? Next in line is a textbook on military technology and its role in world history. The issue here is whether "military revolutions" are real or simply a cultural affect, and how new military technology impacts different societies (again the issue of universality).

One advantage is the benign neglect which has allowed me to pursue various topics without being criticized for “poaching” or too much of a generalist. On the other hand, SJSU shows an almost criminal negligence in terms of support for research. There really needs to be a .2 for research. Otherwise, we will continue our slide into mediocrity.

Part of this is the influence of my father, a History Professor who had a long military career, but also my own interest and experiences, including my six years in the Army National Guard. In addition, there is both a historiographical drive, my opposition to postmodernism and what I see as a kind of quasi-Marxist attitude (not really pacifistic, but lauding “revolutionary” war and criticizing “imperialist” war). Tied to this is the idea of cultural relativism and Third Worldism, which I think has been very harmful not only to academia, but hurts the very people it purports to support.