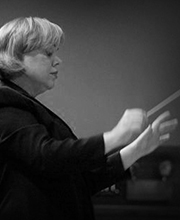 Dr. Diana Hollinger is the Music Education Area Coordinator. Born and raised in California, she received undergraduate degrees in music education, music composition, and her teaching certificate through California State University of Fullerton. She received her Master of Music degree in conducting from the University of North Texas with noted conductor Eugene Corporon, studying composition with the well-known composer, Dr. Cindy McTee, guest conducting the wind groups (Wind Symphony, Chamber Winds, Symphonic Band, and both Concert Bands), and producing for a number of recording sessions. She received her Doctorate of Musical Arts from Arizona State University in music education with a cognate in conducting. While there she studied with conductor Gary Hill, again conducting the wind groups and serving as Research Assistant for the "Digital Conducting Laboratory," working with motion capture systems and other emerging technology to improve conducting pedagogy.

Before pursuing graduate studies, Dr. Hollinger taught in the California public school system for thirteen years, where her groups consistently earned the highest ratings at contests and festivals throughout California, the United States, and Canada. She spent eight years on the board of the California Band Directors Association in posts as President, Past President, Vice President, and Honor Band Host. In addition to her current University duties, Dr. Hollinger serves on the California Music Educators State and the Bay Section boards, the Tapestry Arts board, and is chair of the education committee of the newly formed California Music Project.

Dr. Hollinger is an active adjudicator and clinician throughout California and pursues writing and research, currently concentrating on music education as a means to reach disadvantaged students with her most recent work, Instrument of Social Reform: A Case Study of the Venezuelan System of Youth Orchestras. Dr. Hollinger has also written several chapters for the Teaching Music through Performance series. Her most recent project is the much-acclaimed San José Music Project, a scholarship program she designed for the California Music Project that places university music education students in area public schools to provide them with real-life experience and to assist current music teachers and students.