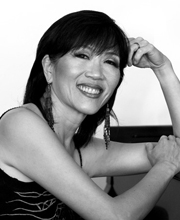 Dr. Gwendolyn Mok serves as the Coordinator of Keyboard Studies. One of the leading experts in the piano music of Maurice Ravel, she has appeared with the world's foremost orchestras and in major concert halls since her 1988 debut with the London Symphony Orchestra in the Barbican. She is a frequent soloist with the great orchestras of Europe and Asia and has recorded with The Philharmonia and The London Philharmonic for Cala records. Ravel Revealed, recorded on an 1875 Erard piano of the complete solo piano works of Ravel for MSR, has been critically acclaimed and is regularly broadcast in the United States and in England on the BBC. Dr. Mok has performed and recorded as well with the Orchestra of St. Luke's, The Group for Contemporary Music, and the Empyrean Ensemble. She is invited regularly to adjudicate major competitions, including The Fischoff National Chamber Music Competition and most recently served on an international panel of jurors for the Russian Piano Music Competition in San José. She has taught at the Royal College of Music, Dartington International Summer School, Welsh College of Music and Drama, and the San Francisco Conservatory.

Dr. Mok received her BA from Yale University, where she studied with Donald Currier and Claude Frank, and her MM and DMA from State University of New York at Stony Brook, where she studied with Gilbert Kalish. Dr. Mok was a recipient of a grant from the French Ministry of Culture to work with Vlado Perlemuter from 1994-1995, who passed onto her his knowledge of Ravel; Perlemuter was Ravel's student from 1927-1928 and was one of the world's leading authorities of his music.

SJSU and their Historic Pianos

Did you know that San José State is one of the few universities to collect historic pianos? In this video Professor of Keyboard Studies Gwendolyn Mok talks about these historic pianos and the history behind their charming music.