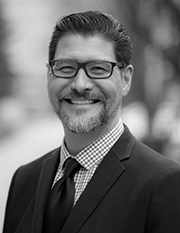 Dr. Gordon Haramaki teaches undergraduate and graduate courses in music history and serves as Graduate Coordinator. He comes to the San José faculty from the University of California, Los Angeles, where he completed his doctorate in musicology under Susan McClary. A 2005 recipient of the Ingolf Dahl Award in Musicology, his recent presentations include the Renaissance Society of America, the American Musicological Society, and the Society of Dance History Scholars. His article “‘In grembo a Citherea’: the representation of ingenium and ars in Claudio Monteverdi’s Tempro la cetra” appears in the journal Early Music, and he is currently at work on a book entitled Structure and Anti-Structure: The Poetics of Monteverdi’s Late Style.

Dr. Haramaki brings his knowledge of Renaissance and Baroque performance practices to his direction of the San José State Collegium Musicum. “Performing Early Music is a great opportunity for students to try something different,” says Dr. Haramaki, “and we are fortunate to have a wonderful collection of period instruments assembled by the late Vernon Reed.”

While Dr. Haramaki’s research focuses on Italian music of the late sixteenth and the early seventeenth centuries, his other interests include American musical theatre and film music, which includes his entries on Busby Berkeley, Ruby Keeler, and Wizard Rock for the New Grove Dictionary of American Music. “As a musicologist in the School of Music and Dance,” Dr. Haramaki explains, “my role is to help our students to learn about music and performance historically—not only for their future professions as musicians, composers, and educators—but so that we can study and understand the power and meanings of the music we write, perform, and listen to.”