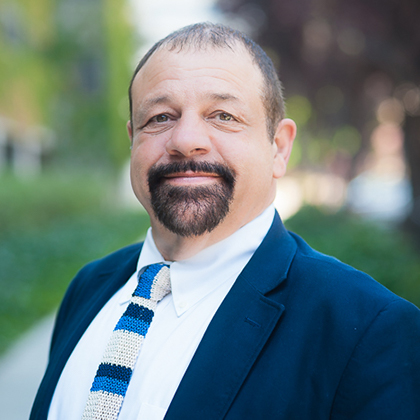 Prof. Scott Winfield Sublett is writer, director, and producer of “Bye-Bye Bin Laden!,” named “Best Feature” at the South Beach International Animation Festival, and writer-director of “Generic Thriller,” a post-modern farce starring Oscar-winner Shirley Jones. Both features are currently available on DVD and streaming. His screenplay “The Good Coach” won a first prize in the 17th Annual Fade in Awards and was optioned by Disney.

His play “Charleston Harbor,” a musical about the greatest black hero of the Civil War, was given a staged reading at the A.R.T./NY Mezzanine Theatre by the Amas Theatre Company in December of 2017. His play “The Repeating Arms of Sarah Winchester” was presented in a staged reading at San José’s Hammer Theatre, also in December of 2017. Previously, Prof. Sublett wrote the librettos and lyrics for the musical comedies “Die, Die, Diana”; “Bye-Bye Bin Laden!”; and “Imperialism: The Musical.” Diana was mounted at the New York International Fringe Festival in a production noted in The New York Times, The New York Daily News, and New York Magazine. “Bye-Bye Bin Laden” was produced by the Custom Made Theatre Company, named “one the top five premieres of 2004” by The San Francisco Bay Guardian, and subsequently made into an animated feature. “Imperialism” received a workshop production at City Lights Theatre in 2007. The independent feature “Pizza Wars: The Movie,” which he co-authored, was screened at the Cinequest Film Festival in 2002 and received national DVD distribution.

His book, “Screenwriting for Neurotics: A Beginner’s Guide to Writing a Screenplay from Start to Finish,” was published by University of Iowa Press in 2014, and in 2018 was published in Chinese translation. Prof. Sublett’s journalism has been published by The San Francisco Chronicle, The Washington Blade, and United Press International.

He also has numerous independent film producing credits, including the feature “All About Dad,” named by Asia Pacific Arts (a publication of The USC US-China Institute) as one of 2009’s “ten best narrative features made by Asian American directors,” and the indie feature “Glory Boy Days,” which premiered at Slamdance in 2008.

He holds an MFA in screenwriting from UCLA and a BS in radio/TV/film from Northwestern University, and is a tenured professor of screenwriting, playwriting, and film studies at San José State University in San José, CA, where he is currently working on a book about the application of comedic principles in dramatic writing, and writing “Gay as Christmas,” a stage farce in which Santa comes out of the closet.