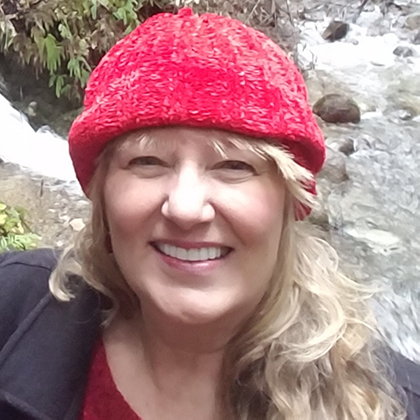 Dr. Kathie Kratochvil  earned her B. A. in Creative Arts/Drama from SJSU, her M.A. in Theatre from SJSU, and her Doctorate in Education (specializing in Arts Education) from the University of California at Santa Cruz. Her teaching background includes 35 years of teaching performing arts to over 15,000 students from kindergarten to university levels in the California public school system, with the last 19 years at the university level.

She has been on the Theatre faculty (and Creative Arts faculty) at San José State University since 2000, and worked as a Mentor Artist in Residence in Theatre for SPECTRA for 15 years prior to that. She has worked in the performing arts community in Santa Cruz County & the San Francisco Bay Area for over 30 years in a variety of capacities including actor, director, lighting designer, production manager, stage manager, and playwright for stage, television and radio. She was the Regional Director of the Bay Area California Arts Project from 2000-2008, where she facilitated and directed hundreds of professional development workshops, seminars and institutes in the visual and performing arts for classroom teachers and artists both regionally and statewide.

Acting and directing credits include numerous productions with a variety of theatre companies that include Jewel Theatre, Santa Cruz County Actors’ Theatre, United Artists Television (for which she was a host of a television show that was nominated for a Bay Area Film & Television New Series Award) , Bay Area Center Stage, Behind the Times Theatre, Cupertino Players, Santa Cruz Repertory Theatre, Monterey Bay Repertory Theatre, Netless Theater, San José State University, Elf Empire Productions, Theatre in the Mountains, KUSP Radio, and others. She was one of the founders of Mountain Community Theatre in 1982, and has acted in, produced, or directed over 50 productions for that company.

She is a published co-playwright (with Dramatic Publishing Company of New York) of a stage adaptation of Miracle on 34th Street which has been produced by approximately 300 theatre companies throughout the U.S. and Canada. She has worked in youth theatre for over 30 years and has directed over 150 youth theatre productions for youth theatre companies and public and private schools in her career. Her research interests center on arts education issues in the public school system, particularly issues involving equity and access for ethnic minorities and second language learners. She has presented scholarly work for The California Alliance for Arts Education, The California Educational Theatre Association, The National Association for Bilingual Education, The California State Superintendents Conference, The California Arts Council, The California Council on Teacher Education, The International Conference on Humanities and the Arts, The Marion Cilker Conference for Arts Education, and numerous school district offices throughout California as well as presenting workshops at Shanghai Theatre Academy in Shanghai, China, and in Melbourne, Australia.

Dr. Kratochvil served on the California Dept. of Education’s committee that designed the 2003 California K-12 Visual and Performing Arts Content Standards for Theatre. She has received Certificates of Recognition from the California Senate, The U. S. House of Representatives, and the Santa Cruz County Board of Supervisors for her work in Arts Education. She has also served on the board of the California Educational Theatre Association. She was recently awarded SJSU's College of Humanities and the Arts "Distinguished Service Award" in May of 2017.