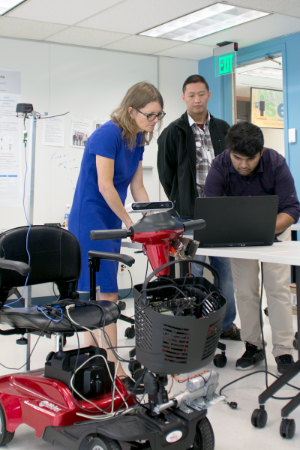 Dean Sheryl Ehrman previously served as Keystone Professor and Chair of the Department of Chemical and Biomolecular Engineering, at the University of Maryland, College Park, since 2010. She had worked at that university since 1998 as a faculty member. As Chair, she oversaw an expansion of tenure-track faculty, development of two new BS/MS programs, the growth of the transfer student pathway, initiation of a multidisciplinary research center for advanced battery technology, and development and implementation of strategies to engage alumni and industrial partners.

California is not new to Dean Ehrman; in fact, she feels as though she is returning home. She received a bachelor’s in Chemical Engineering from U.C. Santa Barbara and went on to complete a Doctoral Degree in Chemical Engineering in the major field of Aerosol Science and Technology and the minor field of Atmospheric Science at UCLA. She is a licensed professional engineer in the state of Maryland.

Ehrman served as a visiting scientist with the National Institute of Standards and Technology, in Maryland and as a National Science Foundation-sponsored post-doctoral fellow at the Paul. Scherrer Institute, in Switzerland. In 2006, she was named a Fulbright Scholar and visiting associate professor at the Indian Institute of Technology, Bombay, where she engaged with students and faculty in the Department of Chemical Engineering. She served as a Fulbright Alumni Ambassador from 2013-16.

Give to SJSU Engineering