Whether in laboratory or on the front lines in the community, these SJSU researchers seek healthy outcomes for all. 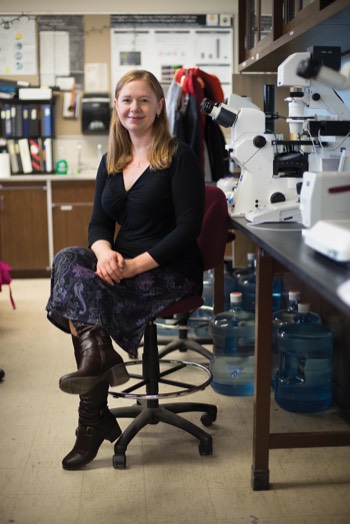 In Miri VanHoven’s research lab, she and her students seek to understand how neural circuits are formed and maintained. Neural circuits are part of a relay of neurons that connect and communicate with one another throughout the body. Th ese functional components of the nervous system control perception, such as sight and smell, as well as thought and physical movement.

“We know a great deal about how neural circuits function, but less about their formation and modification,” Dr. VanHoven explains. “Our lab is exploring the molecular processes that govern the steps of formation and growth, as well as how sensory experience shapes and maintains these circuits later in life.”

While Dr. VanHoven hopes that her long-term research leads to scientifi c discoveries, she embraces the rewards she finds in teaching.

“Th e allure of curing diseases is strong,” she says. “I hope my discoveries will lead to something important medically fi ve or ten or twenty years down the road. But part of me wants to make a difference right away – that is the part that is satisfied by educating and working with students.” 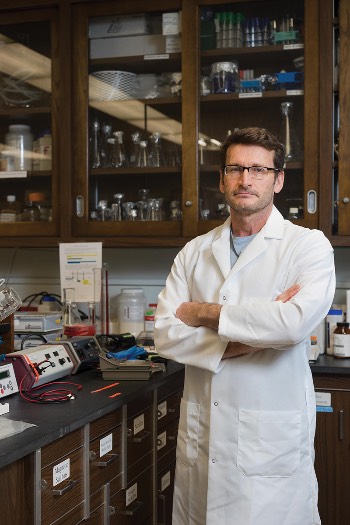 If you spend a litt le time learning about Cleber Ouverney’s microbiological research into periodontal bacteria, you may decide to visit your dentist sooner rather than later.

Dr. Ouverney began his Ph.D. studies by examining bacterial diversity in the oceans. He noticed that a number of the marine bacteria he was studying had a counterpart in the human body. He investigated this relationship between environmental and human bacteria during his post-doctoral research.

“It was during that time that I became interested in a specific group of bacteria that is associated with oral diseases such as periodontitis.”

That group of bacteria, referred to as TM7, is also found in diverse environments such as soil, sludge, and volcanic ash.

“We discovered that most people have TM7 in their mouths, but some types of TM7 are there in larger abundance as the disease progresses from healthy to gingivitis (gum inflammation) and then periodontitis (loss of tooth bone mass).”

Keep in mind, however, that less that fifty percent of bacteria are bad.

“Bacteria take the bad rap as causing damage to humans, but in fact, most bacteria work to protect the host against disease-causing bacteria and viruses by out-competing them for resources.”

Both undergraduate and graduate students work in Dr. Ouerney’s lab. His students have gone on to complete Ph.D. programs and to work in hospitals, in clinical labs, and at biotechnology companies such as Genentech, Illumina Inc., Life Technologies, Ion Torrent, and Maverix Biomics. 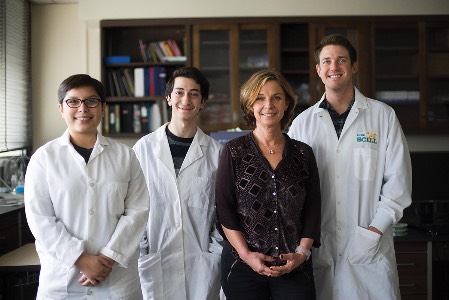 Tzvia Abramson and her students are engaged in the study of the highly contagious Bordetella pertussis bacterial infection, more commonly known as whooping cough. Their work focuses specifically on T helper 17 (Th 17) cells, which have a central role in resolving the infection.

“Prior to the development of the vaccine in the 1940s, whooping cough was a common cause of death among children,” Dr. Abramson explains. “Rates dropped dramatically aft er the vaccine’s introduction.”

Dr. Abramson’s students are researching a mechanism that will recruit Th 17 cells to the infection earlier, which may speed the body’s immune response against the infection and could eventually contribute to an improvement in the vaccine. With her enthusiastic support, they are co-authoring journal articles on the subject and recently presented their findings at the CSU Annual Biotechnology Symposium.

“Engaging with students is the most gratifying part of my work,” she says. 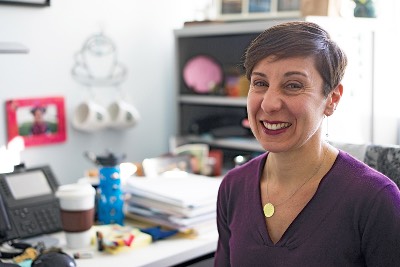 When The Health Trust sought evidence-based wellness programming for older adults in Silicon Valley, they turned to Tamar Semerjian at San Jos. State University. Her efforts led to the creation of the Silicon Valley Healthy Aging Partnership (SVHAP), a collaborative organization that shares aging-related educational resources and health promotion programs with community centers and agencies across Silicon Valley.

Dr. Semerjian’s leadership at SVHAP has had a huge benefi t for SJSU kinesiology students: opportunities to work in the fi eld with aging adults.

“Our service-learning courses allow students to go out and conduct evidence-based physical activities in the fi eld,” explains Co-PI and SVHAP Project Coordinator Jennifer Schachner. “They are reading research articles at the same time that they are managing community programs and teaching. They immediately connect that research to actual practice.”

These service-learning experiences have led to significant career success for the participants.

“Many of those who have graduated are now working for agencies such as the City of San José or the YMCA,” says Dr. Semerjian. “One of the most rewarding results of my work is seeing my students sitting across the table as collaborators when I go out into the community.” 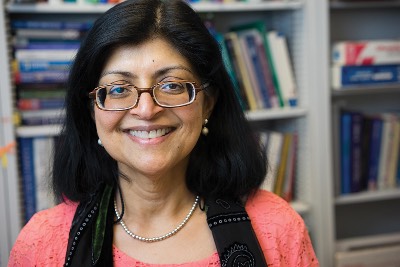 With a grant from the Mid-Peninsula Housing Corporation, Sadhna Diwan brought together a multi-disciplinary team of 30 SJSU students and six faculty to provide wellness programs to the diverse residents of a senior housing complex in Mountain View. Blood pressure monitoring, home safety, Matter of Balance, nutrition, and recreation therapy were just a few of the programs presented.

“The idea is for students to develop both theirresearch and clinical skills,” Dr. Diwan explains. “Working with these seniors has been a careerbuilding opportunity.”

Dr. Diwan is the director SJSU’s Center on Healthy Aging in Multicultural Populations (CHAMP). Th e grant was a mechanism for CHAMP to fulfi ll its mission of providing students with opportunities to engage in multidisciplinary practice with diverse populations.

One initial challenge in delivering the programs was the fact that fi ve languages were spoken by the clients: English, Farsi, Korean, Mandarin and Russian. Fortunately, there were speakers of each of those languages among the students providing services, which led to cross-disciplinary interpretation cooperation.

CHAMP’s success in Mountain View led to a subsequent grant from the City of San José where students provided similar services to San José adults age 60 and older.